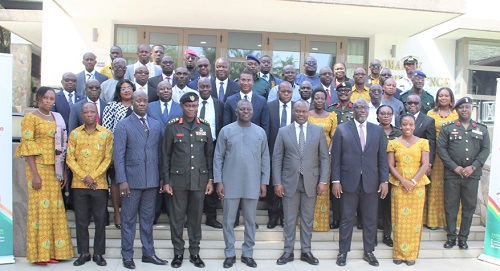 Benito Owusu-Bio (5th from left) and S.E. M Tiémoko Moriko (4th from right), Ambassador of Cote d’Ivoire to Ghana, with members of the technical teams of the two countries. Also with them is Major General Kotia (4th from left) and Diakalidia Konate. Picture: DELLA RUSSEL OCLOO
30.5k Shares

A two-day Joint Technical Meeting to facilitate the reaffirmation of the joint Ghana-Cote d’Ivoire land and maritime boundaries has ended in Accra.

Representatives of Ghana and the Cote d’Ivoire Boundary National Commissions attended the meeting which also updated the status of the draft cross-border process of the Niamey Convention.

A Special Chamber of the International Tribunal for the Law of the Sea (ITLOS) in a September 23, 2017 judgment confirmed the equidistance (equal distance) in a case Ghana had filed at the tribunal on the back of commercial hydrocarbon discoveries off the coasts of Ghana and Côte d’Ivoire in 2009.

The two states have been engaged in a long-standing dispute concerning the delimitation of the maritime boundary with each state claiming that the discoveries were made within areas to which it is entitled.

A Deputy Minister of Lands and Natural Resources, Benito Owusu-Bio, addressing the opening session, indicated that the emerging security threats confronting the West African sub-region was a clarion call for the two countries to jointly manage their common land and maritime boundaries to intensify the safeguarding of their territorial integrities.

He said the significant progress made by the boundary commissions of the two countries over the past months, which had brought about the joint technical meeting, were crucial for the management and preservation of the shared common boundaries.

Disputes over maritime boundaries and competing claims to resources could seriously hinder efforts to advance the growth of coastal states.

Ghana and Cote d’Ivoire, he said, had shared commonalities, particularly along their border communities, “except for the official languages, there is no striking difference between us and this is the more reason it is indispensable for our two countries to iron out issues in a concerted and timely manner,” the minister said.

The Ambassador of Cote d'Ivoire to Ghana, S.E. M Tiémoko Moriko, in his remarks, congratulated the technical committees of the two countries on the work done so far to facilitate lasting solutions to challenges and expressed the hope that the road map and strategy documents from the meeting would go to scale up efforts by the two countries to advance the economies of both countries.

The Executive Director, National Boundary Commission of Cote d’Ivoire, Diakalidia Konate, for his part, said that the meeting provides the two bodies a platform to build an enhanced relationship for the protection of the boundaries.

He expressed the hope that the two collaborations between the two boundary commissions would also ensure a joint sensitisation to illicit activities within the border areas of the two countries.

The National Coordinator of the Ghana Boundary Commission, Major General Emmanuel Kotia, said the two countries would be aiming at coming out with a blue print to address current challenges such as the destruction of boundary pillars and landmarks along the common international boundary line.