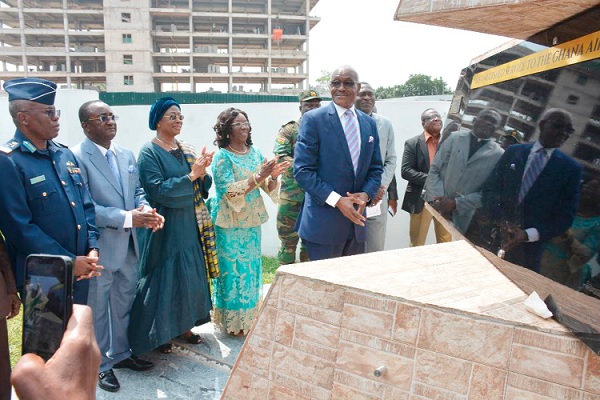 • Wg Cdr Andy Mensah (right) receives applauds after he unveiled the plaque mounted in his honour. With him include Chief of Air Staff, AVM Frank Hanson (left)
30.5k Shares

Assisted by the Chief of Air Staff (CAS), Air Vice Marshal (AVM) Frank Hanson and other dignatories, Wg Cdr Mensah (retd) last Thursday personally unveiled a commemorative plaque which was mounted at the forecourt of the Air Force Headquarters at Burma Camp to acknowledge the enduring legacy of the distinguished retired officer and serve as a testament to those in active service to be diligent, selfless and committed to their respective assignments.

Even as a No l Squadron Operational Pilot, he flew single engine aircraft with co-pilots at odd hours in challenging weather conditions on medical evacuations to recover patients from remote areas.

He landed and took off on the perilous short airstrips of Nandom, Yendi, Wa and Navrongo in the Northern regions and Ho in the Volta Region, with virtually no navigation aids and minimum air traffic communications.

Wg Cdr Mensah (retd) undertook some developmental projects in the Ghana Armed Forces (GAF), which included the remodelling of the entire aircraft parking areas and environs at the Accra Air Force Base, the training of GAF pilots and Air Traffic Controllers for various commercial licences in conformity with International Civil Aviation Organisation (ICAO) standards and procedures, among others.

He was also a member of the first GAF overseas operational detachment of six pilots and two Air Traffic Officers to be deployed to the Democratic Republic of Congo to help stabilise Eastern Katangese Province ruled by General Mobutu Sese Seko.

He also established and fully equipped the Air Force Base Computer Centre, remodelled and equipped the Emergency Unit of the 37 Military Hospital.
He also assisted GAF in the reconfiguration of the GAF Fokker 27 aircraft to be ICAO complaint.

The Chief of Air Staff stated that the unveiling of the plaque at the historical monument was initiated to honour officers and airmen who had distinguished themselves in their service to the Air Force, God and country.

AVM Hanson added that the selfless and meritorious service by the distinguished personalities could not be overlooked, hence the need to honour them while they were alive.

Wg Cdr Mensah expressed his gratitude to the Ghana Air Force and admonished officers, airmen and women and the defence civilian staff of the Ghana Air Force to pursue excellence in their professional careers as well as the execution of their mandate of protecting the territorial borders of the country.

To achieve that, he urged all to exhibit a high sense of integrity and loyalty, competence, self-discipline, and the tenacity to say “yes” or “no” in accordance with their judgment without fear or intimidation.

Albeit, the retired distinguished officer enjoined everyone to employ a cocktail of humility and humour in their line of duty and cautioned everyone to bear in mind that posterity would be the judge of their actions.

Relying on the famous maxim that a nation that does not honour its heroes and heroines is not worth living for, Wg Cdr Mensah expressed the hope that their ingenuity would transcend the Ghana Air Force to the other services and society as a whole.

Some dignitaries present at the occasion were the former Chief Justice, Justice Sophia Akuffo, the outgoing Minister of Food and Agriculture, Dr Owusu Afriyie Akoto, and former Chief of Defence Staff of the Ghana Armed Forces, Air Marshal Samson Oje.