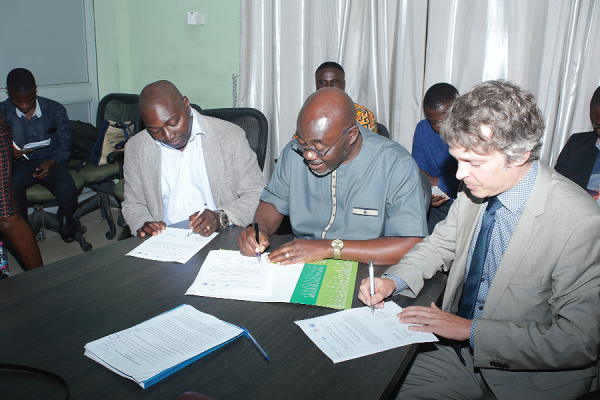 Germany is supporting Ghana, Benin and Côte d’Ivoire with 3.5 million euros to build infrastructure for effective and Integrated Ocean Management of the beneficiary countries.

In Ghana, the funds will be used under a project known as “Ecosystem based approach to an integrated marine and coastal environment management in Ghana”, which has been christened as MAMI WATA project.

It will focus on institutional capacity building, marine environment assessment and spatial planning in beneficial countries.

It is being implemented within 22 Abidjan Convention countries that signed a cooperation agreement for the protection, management and development of marine and coastal environment of the Atlantic coast of the West, Central and Southern Africa Region at the 12th Conference of the Parties (Cop) of the Convention, which took place in Abidjan in 2017.

Germany, however, chose to support the three countries to pilot the project after reviewing proposals from all 22 countries due to inadequate funding.

The project will build on capacities of the beneficiary countries to make informed and coordinated decisions on how to use marine resources sustainably.

The Environmental Protection Agency (EPA) is Ghana’s implementing agency while Germany is being represented by the German Ministry of the Environment, Nature Conservation, Construction and Nuclear Safety.

The project is implemented by partners, GRID-Arendal and the Abidjan Convention Secretariat and funded by the German Federal Ministry for the Environment, Nature Conservation, Building and Nuclear Safety (BMU), through its International Climate Initiative (IKI).

At the project launch in Accra last Wednesday, the Leader of the programme, Mr Christine Neumann, said it would provide the groundwork for a wider application of the Integrated Ocean Management (IOM) in the Abidjan Convention Region.

“To do so, the project is building technical and institutional capacity through activities that are especially designed to create strong and connected partnerships within and between countries, institutions and stakeholders,” he stated.

“When we say IOM, we mean bringing stakeholders together, identifying the state of the marine environment and making sure the maritime space is allocated for variety of uses in a way that minimises conflict between the users for sustainable use,” he said.

A Deputy Executive Director of the EPA, Mr Ebenezer Appah-Sampong, said the project would help Ghana manage its oceans and ensure effective marine spatial planning, as well as address some of the challenges the sector was currently encountering.

He expressed appreciation to the government of Germany for the support.

Mr Appah-Sampong said Ghana’s coastline constituted 550km and has an Exclusive Economic Zone (EEZ) of over 218,000km2 and continental shelf of over 23,700km2.