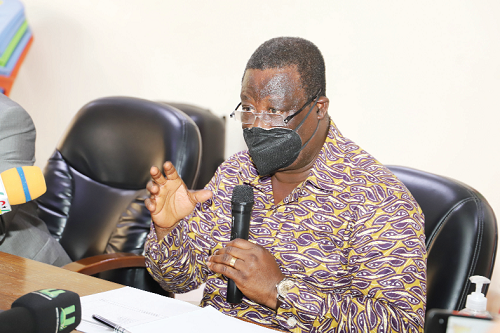 Mr Kwasi Amoako-Attah, the Minister of Roads and Highways, speaking at the meeting with road contractors in Accra

The government has earmarked GH¢50 million to undertake emergency works on roads in the Upper West Region that were washed away by floodwaters on August 13, this year.

The Minister of Roads and Highways, Mr Kwasi Amoako-Attah, disclosed this at a meeting with four local contractors who had been tasked to undertake the rehabilitation works in Accra yesterday.

The meeting was a follow-up to the minister’s visit to the region to assess the extent of destruction caused by floodwaters to the road infrastructure there.

Mr Amoako-Attah mentioned the affected areas to include roads at Yiziri, which lies between Nadowli and Yagha on Route R132, the road between Guoriyiri and Nadowli on Route N12, the road just before Daffiema on the Sambo-Daffiema road, which is a feeder road, and the road between Fian and Bussie on Route N18

Explaining the extent of damage and the scope of work to be done to restore the roads, the minister said the works would be done at eight locations in the region.

The works were site clearing and demolition works, concrete works, road pavement and surfacing works, as well as other works that would be done on a case-by-case basis, he said.

“Traditionally, the region has a single rainy season between June and October, but in the past few days it has experienced excessive rainfall, with associated floods, which has negatively affected some roads in the road network,” he said.

Mr Amoako-Attah said the government was poised to ensure that the affected roads were restored immediately to guarantee a rebound in economic activities in the region.

"I will say you should start work tomorrow because you have to finish as soon as possible. All the contractors have the capacity to work day and night and so if we give them the resources, I am sure they can finish early," he said.

In spite of the devastation caused to roads, the minister said, not a single bridge in the region was destroyed by the floods.

“All bridges are intact; it is gratifying that they were not affected because they are pure concrete work and it takes time to build. It would have delayed efforts to turn around the situation,” he said.

Mr Amoako-Attah explained that the government was handling the situation as a national disaster that needed an emergency response.

“What happened in the Upper West is a national issue and it will not be treated as a regional matter. The region received heavy rainfall that lasted many hours. We know that the region records heavy rains, but this time there was high return rainfall. I don't know if it’s a technical term, but they say such rainfall occurs once in 50 to 100 years.

“When I met with the Wa Na, it came up that that kind of rainfall was experienced some 50 years ago. This high return period of rainfall caused a lot of damage to farmlands, but what is more pronounced is the harm it caused to roads,” he said.

The minister indicated that the ministry would intensify its work, as it had done since the disaster struck.

“For the past one week, we have been working day and night. Engineers at the ministry and its agencies are working together as a team and I am so happy with the spirit with which the assignment is being carried out. The engineers have come up with estimates and clearly defined the scope of works,” he said.

Mr Amoako-Attah noted that there were about 20 local contractors who had the capacity to execute the works, but explained that only four had been chosen due to the scope of work and the contractors’ proximity to the affected areas.

“It is a national assignment; a disaster that has befallen one region, and we are doing everything to resolve the issue. Let me assure you (contractors) that the government is working to release the money to you because this is an emergency. As you go along, we will resource you; I want to assure you of that on behalf of the government," he said.