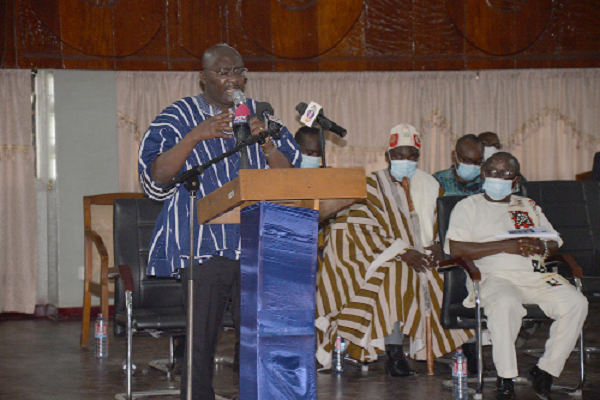 The Fund, which is an initiative of the Konkomba Youth Association (KOYA), is a support system for students to attain higher education, especially for those who seek to pursue resource-intensive academic courses such as law, medical science, aeronautics and aviation as well as ICT-related careers.

The specific objective of the Fund, 60 per cent of which will be dedicated to girl-child education, is to enhance human capital development among the Konkombas by raising their level of education.

The historic launch of KEEF in Accra last Monday, brought together high-profile personalities such as the Minister of Defence, Mr Dominic Nitiwul; the Running mate of the National Democratic Congress (NDC) flag bearer in the 2020 election, Professor Jane Naana Opoku- Agyeman; the Deputy Minister of Roads and Highways, Mr Stephen Jalula; the Oti Regional Minister, Mr Joshua Makubu; the Dean of the University of Ghana Business School (UGBS), Professor Justice Bawole, as well as some past and present Members of Parliament (MPs).

In demonstration of his support for KEEF, Dr Bawumia donated GH¢100,000 to the initiative.


Other attendees at the event donated money ranging from GH¢30,000 to GH¢1000 in support of the fund.

Speaking at the event, Dr Bawumia described the KEEF as a national initiative that would augment the government's investment in education as a tool to fight poverty and underdevelopment in the country.

"The Konkomba Education Endowment Fund is a great initiative because it will serve a good national cause.

I, therefore, wholeheartedly endorse it and call on all other people and institutions to support it," he said.

He urged the managers of the fund to be prudent and transparent in the management of the proceeds to justify the contribution made by people and institutions.

The Vice-President also urged the managers of the Fund to be transparent in the selection of beneficiaries since failure to do so could defeat the purpose of the Fund.

The Vice-President observed that human capital was the greatest resource for socio-economic development, which was why the government made modest investments in all levels of the country’s education system.

He said the implementation of the free senior high school (FSHS), despite the challenges, was a testament to the commitment of the government to improve the human resource capacity of the youth.

For her part, Nana Opoku-Agyeman said she was particularly enthused by the fact that KEEF was targeted at improving education among the youth and females.

The Dean of the University of Ghana Business School (UGBS) and Chairman of the Konkomba Development Committee, Professor Justice Bawole, said education was a leveller of development as it helped to bridge the gaps in society.