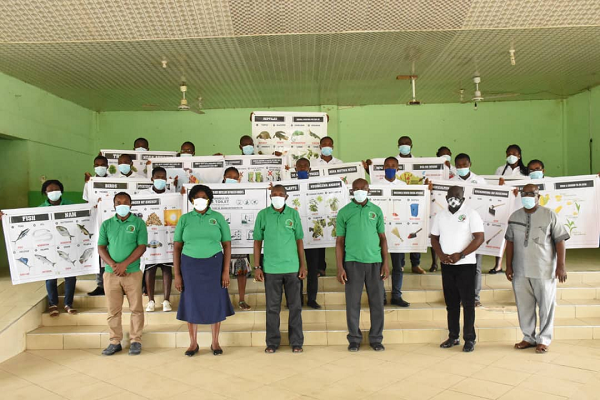 The Association of School Forest for West Africa, a German-based Non-Governmental Organisation(NGO) in partnership with its local partner, Youth and Environment Club (YEC), based in Agona Nyakrom has presented teaching and learning materials (TLMs) on the environment to some selected basic schools in three districts in the Central Region.

The presentation at the Teachers’ Workshop at Agona Nyakrom, formed part of series of activities by the two NGOs aimed at changing the attitude of school children so as to slow down the continuous degradation of the environment for the benefit of all.

In a speech delivered on his behalf, the President of Association of School Forest for West Africa, Dr Sam Kwesi Essiamah said that sustainable environment could only be achieved by educating school children since they have significant roles to play towards realizing it.

He noted that the two NGOs with support from their donor partner, Lower Saxony Bingo Environmental Foundation, would intensify environmental education in the 16 beneficiary basic schools using both Fante, a local language and English Language to enable the school children to have a clearer understanding of the project.

He stated that the use of the local language in the environmental campaign project is a novelty since it was the first time to be applied, saying “this is long overdue because children in Africa and in Ghana do not develop their potentials fully since they have in a foreign language to reflect what is going on around them”.

“For instance, children in many countries like Germany, China, Russia and Britain develop their potentials easier and are more inventive using their own mother languages in everything they do” he pointed out.

He stressed, “I therefore hope that this innovation would be replicated in other parts of the country to enable school children to confront head on issues lead to the destruction of the environment.”

He further called on government through the Ghana Education Service (GES) to take immediate steps to make tree planting and environmental education compulsory in schools to inculcate good environmental practices in school children.

By so doing, he noted that it would enable the younger children to be well-equipped with the knowledge required to contribute to the protection of the environment for the ultimate benefit of all generations.

The Executive Chairman of YEC, Nana Ambrose Arthur, underscored the need for everyone to join efforts toward the protection of the environment since its continuous degradation is a threat to the survival of mankind.

He urged the teachers in the beneficiary schools to be committed to the campaign towards achieving its intended objective within the stipulated period.

For his part, the Agona West Municipal Director of the Ghana Education Service (GES), Mr Joseph Kingsley Akwaboah commended the NGOs for the project as it would go a long way to protect the environment.

He called for the adoption of a project that would enjoin every basic school pupil to plant a tree and nurture it to grow before completing school, stressing “there is the need to pursue aggressive tree planting to replace already cut ones to protect the environment.

“It is incumbent on everyone to make conscious efforts toward protecting the environment for the survival of the current and future generations,” he posited.