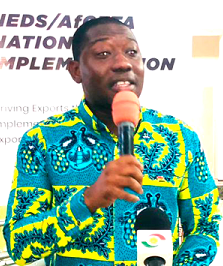 The Ghana Export Promotion Authority (GEPA) has organised a day's sensitisation on the new National Export Development Strategy (NEDS) for stakeholders within three municipalities in the Eastern Region.

The seminar was meant to build the capacity of the stakeholders on the new NEDS strategy.

The programme brought together farmers, representatives from the Food and Drugs Authority (FDA), Ministry of Food and Agriculture (MOFA) and the Ghana Standards Authority (GSA), among others drawn from the New Juaben South, New Juaben North and the Suhum municipalities.

Topics treated included implementation plans and integration into medium-term development plans of districts, the Africa Continental Free Trade Area (AfCFTA) and its implementation in Ghana, its status and the way forward.

The NEDS, which was launched by the President, Nana Addo Dankwa Akufo-Addo in 2020 to end in 2029, will provide a clear direction and is intended to increase non-traditional export earnings to US$25.3 billion.

Addressing the participants at Koforidua last Friday, the Deputy Minister of Trade and Industry, Herbert Krapa, said the implementation of the NEDS would help open up the local economy.

According to him, NEDS aimed at propelling the country to break the cycle of being a raw material producing and exporting economy with only limited levels of manufactured goods and services.

That, he explained, would also expand other important sectors such as transportation, agriculture, and at the same time provide employment.

The Deputy Minister noted that the actual implementation of the NEDS should be at the district level, hence the initiation of nationwide district sensitisation seminars at all levels, starting from the Eastern Region.

That, he indicated, would transform Ghana’s economy from over-reliance on imports to that of export-driven.

Mr Krapa stated that it would benefit the country if NEDS succeeded in increasing the local production base to meet export demands.

He said there was the need to intensify public awareness and ensure that stakeholders from both public and private sectors understood the whole concept and helped it to succeed.

According to Mr Diwura, the district level held the key to sustainable export development strategy because they were the sources of raw materials needed by industries to increase the value addition as a country.

He indicated that his outfit was ready and poised to provide all the needed leadership required and called on all stakeholders to join hands to develop the export capacity at the local level and the country as a whole.