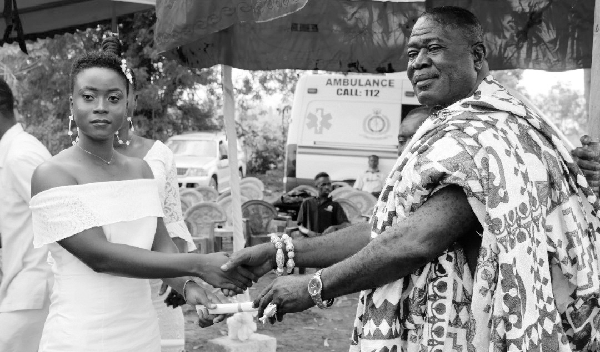 One hundred and fifty-eight young people who have acquired skills in the operation of heavy duty machines from the Global Institute of Mines and Safety (GIMS) have graduated after three months of training.

GIMS, based at Afrisipakrom in the Tano North Municipality in the Ahafo Region trained the beneficiaries to operate excavators, cesspit emptier trucks, general drilling, bulldozer operation as well as forklift and mobile crane operations.

The institute, which was established in 2018, used a period of three months to train the beneficiaries with the ultimate goal of providing employable skills to the youth.

So far, the institute has graduated 423 people since its inception, with some of the trainees being employed in some mining companies across the country.

Speaking at the second graduation ceremony of the institute, the Chief Executive Officer (CEO) of GIMS, Mr Gabriel Larry, appealed to the public to invest heavily in their children’s technical and vocational training as it provided them with employable skills.

He said the aim of the institute was to empower the youth with employable skills to provide them with meaningful lives.

Mr Larry explained that he conducted a survey in some mining communities and realised that even though most of the youth in those areas had the zeal to work in the mining companies, they lacked the requisite qualifications.

He said out of that survey, he decided to come up with programmes that would empower and provide the youth in the mining communities with the requisite skills to enable them to gain employment in the mining industry.

He explained that what they were offering was based on one’s competence and not educational background.

Mr Larry said the institute was partnering with establishments such as AT John Engineering Projects Limited in Sunyani which offered them equipment to train the students.

He said he was also collaborating with the Newmont Ahafo Development Foundation (NADeF), the Ghana National Ambulance Service (GNAS), Ghana National Fire Service (GNFS) and the Driver and Vehicle Licensing Authority (DVLA) to provide technical training for the trainees.

Mr Larry said after the training, the institute assisted the trainees to acquire licenses and Mineral Commission certificates of competency.

For his part, the Economic Advisor and Spokesperson for Vice-President Mahamudu Bawumia, Dr Gideon Boako, said technical and vocational training institutes held the key to the future of the country.

Dr Boako said the inclusion of technical and vocational education and training (TVET) in the Free Senior High School policy and the launching of TVET service to include TVET institutions in next academic year’s Computerised Schools Selection and Placement System (CSSPS) for selection by junior high school (JHS) graduates demonstrated the government’s commitment to the area.