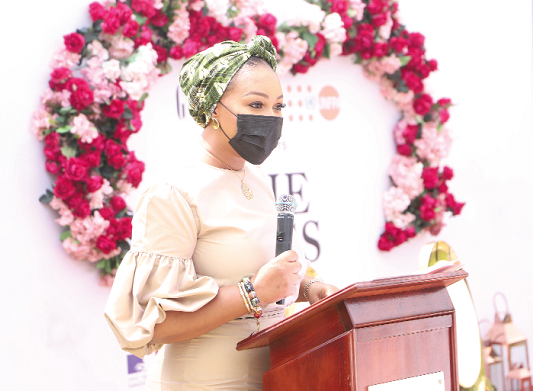 Ensuring gender equality, equity and empowerment is a shared responsibility, the wife of the Vice-President, Mrs Samira Bawumia, has said.

She said commemorating the International Women’s Day was a reminder of the collective goal to choose to challenge the status quo.

Mrs Bawumia, who described herself as a passionate advocate for gender equity, women’s health and empowerment, was delivering the keynote address at a seminar to commemorate International Women’s Day at the Residence of the French Ambassador in Accra yesterday.

The 2021 commemoration was on the theme: “Women in Leadership: Achieving an equal future in a COVID-19 world.”

The forum, which was organised by GLITZ Africa lifestyle and fashion brand, under the sponsorship of the United Nations Population Fund (UNFPA), with support from the French Embassy, brought together women leaders, executives and entrepreneurs and development partners together to share ideas on women’s empowerment.

Mrs Bawumia said a challenged world was an alert world and everybody could choose to challenge gender bias and inequality.

“We should all celebrate women’s achievements. Collectively, we can help forge gender parity and create an equally balanced world. From challenge comes change, so let’s choose to challenge,” she stated.

Since the campaign ran all year, she called for the support of all stakeholders not to let the challenge end on International Women's Day.

“Let us inspire; let us motivate; let us mentor and create an environment that especially allows women to grow and thrive. As we celebrate today, let us remember that International Women’s Day is every day that we speak up; it is every day

that we act, and it is every day that we #ChooseToChallenge and consistently commit to calling out inequity,” she said.

Mrs Bawumia said she found the United Nations theme for this year’s International Women’s Day celebration: “Women in Leadership: Achieving an equal future in a COVID-19 world”, most appropriate, as it celebrated the efforts by women and girls around the world in shaping a more equal future in the recovery from the COVID-19 pandemic.

However, she said, it was still a source of concern that in spite of the progress made on gender equality and women’s rights, the COVID-19 pandemic threatened to undo many of the gains.

“The pandemic is deepening pre-existing inequalities and exposing vulnerabilities in social, political and economic systems.

“Across every sphere, from health to the economy, security to social protection, the impacts of COVID-19 are worsened for women and girls simply by virtue of their sex. Gender poverty gaps are widening; gender-based violence is resurgent, and girls’ education and maternal health care are threatened,” she said.

Mrs Bawumia said the crisis had highlighted both the centrality of women’s contributions and the disproportionate burdens that they carried.

“All over the world, millions of women lost their jobs, as markets fell and businesses closed, coupled with restricted movement and social distancing measures. Nearly 80 per cent of women in Ghana who mostly work in the informal economy, earning less, saving less, are at greater risk of falling into poverty.

“As women lost paid employment, women’s unpaid care work at home also increased. It is women who disproportionately bear the responsibility of unpaid care work. As a Global Champion for the United Nations Foundation’s Clean Cooking Alliance, I am keenly aware of this issue,” she said.

Mrs Bawumia said the pandemic had also led to a horrifying increase in violence against women.

The Deputy Country Representative of the UNFPA, Dr Agnes Kayitankore, said all over the world, women led in diverse ways and sectors.

She said the UN was encouraging women and girls who dreamt of leadership to take it up.

Dr Kayitankore said statistics available to the UNFPA showed that currently there were only 14.5 per cent of women in Parliament and 4.6 per cent of women elected into the metropolitan, municipal and district assemblies.

Besides, only eight women made the list of 46 ministers designate, which came to a paltry 17 per cent.

She said the country was currently ranked 145th out of 193 in the Inter-Parliamentary Union ranking on women representation in Parliament across the world.

“But I believe that we will get there, and that women, collectively, will change our world for the better. Where there is gender equality, societies are more prosperous; peace is more durable; all of society benefits,” she said.

Dr Kayitankore said the need for women to play full roles in shaping pivotal decisions politically, economically, socially and culturally had to be echoed.

“And that is why, more than ever, turning our focus to ending sexual and gender-based violence is very crucial,” she said.

She noted that there was also a strong civil society organisation (CSO)/non-governmental organisation (NGO) presence in Ghana that were able to sensitise, create awareness of and advocate the issues of sexual and gender-based violence (SGBV).

Other speakers, such as the Founder of Reroy Cables Limited, Mrs Kate Quartey-Papafio, and UN International Elections Commissioner and immediate past Chairperson of the Electoral Commission, Ms Charlotte Osei, called on all women not to be deterred by any obstacles they faced.

In separate submissions, they a called on women to see opportunities in every challenge and persist until they made the mark.

They also called on men to be advocates of gender equality, as the phenomenon was critical for national development.