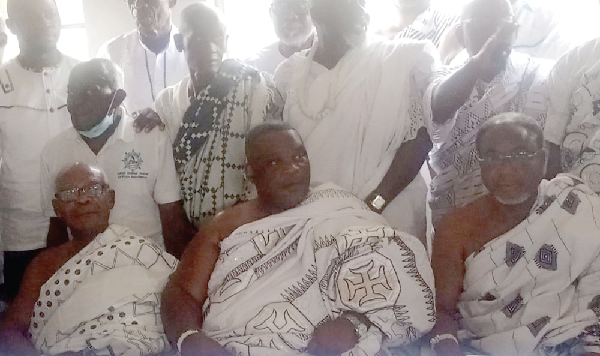 The Head of Onamroko Adain Family, Nii Josiah Carl Reindorf, and the entire family have been admitted under the Gbese Stool at a short but impressive ceremony in Accra.

Their admission became necessary because the Gbese Onamroko Adain Family, one of the key clans in Gbese, had for a while been absent from Gbese administrative and jurisprudence activities due to internal wranglings.

However, the spectacular event — which took place last Saturday — has put an end to the family squabbles and apparently revived unity under the Stool to open a new chapter in the traditional administrative set-up of Gbese, which prides itself as a people who thrive on unity for development.

The entourage was received at the forecourt of Gbese Mantse's Palace, where they went through the protocols of the necessary traditional norms and practices before being ushered into the inner chambers to sign a memorandum of understanding and an undertaking to provide a guide for the future.

The Gbese Mantse and the Adonten of the Ga State, Nii Ayi-Bonte II, lauded the initiative of the Onamroko Adain Family and commended them for extending the olive branch to all and sundry for unity to prevail.

He said a new chapter had opened for the family and the Gbese Stool to create a relationship which should benefit all parties by creating social cohesion for development.

Nii Ayi-Bonte, however, cautioned the family to be proactive in seeking the welfare of all and sundry with mutual respect based on brotherliness to accelerate the socioeconomic development of the area.

Nii Reindorf commended the Gbese Mantse and his Council of Elders for their foresightedness and unwavering desire to ensure peace within the family, saying it had culminated in unity under the Gbese Stool.

He promised that the family would continue to adhere to the new principle of unity for development and work in tandem with the Gbese Stool to bring the needed development to Gbese and its teeming youth.