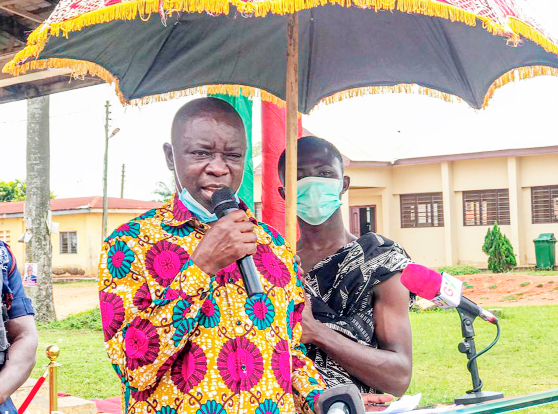 The government is determined to weed out illegal mining and create sustainable livelihoods for people living in mining communities, the Minister of Lands and Natural Resources, Mr Kwaku Asomah-Cheremeh, has said.

He said after three years of employing radical measures to clamp down on illegal mining, popularly called galamsey, the government was now focused on the community mining scheme (CMS) as the effective vehicle to restore mining communities to their livelihood activities.

He said the measures taken by the government to sanitise the small-scale mining sector, including the ban on all forms of small-scale mining, were not meant to punish the people but reinstate and protect land and water resources and the environment as a whole.

At the launch of the Atunso CMS in Konongo in the Asante Akyem Central municipality in the Ashanti Region, Mr Asomah-Cheremeh called on all stakeholders to play their part to ensure that the novelty mining arrangement succeeded.

Eight concessions that had been carved out for the Atunso CMS were inaugurated at the event, bringing to 16 the number of CMS areas that have been launched in mining districts.

More than 1,500 youth have been registered and trained on sustainable mining, in line with the provisions of sections 81-89 of the Minerals and Mining Act, 2006 (Act 703).

Mr Asomah-Cheremeh said the ministry and the Minerals Commission would ensure that the necessary procedures were followed in the CMS.

He called on other stakeholders, especially traditional rulers, metropolitan, municipal and district chief executives and opinion leaders, to work together for the successful implementation of the scheme.

He further indicated that officials of the Minerals Commission, the Environmental Protection Agency (EPA) and the security agencies would periodically visit CMS concessions to enforce the laws governing their activities.

The Chairman of the Minerals Commission Board, Mr S.K. Boafo, urged the beneficiaries to go about their business within the confines of the law, saying they needed to adhere strictly to safety protocols at the mining sites.

"I want you to know that the CMS is not galamsey and so do it properly and follow safety protocols. We do not want any of you to die looking for gold," he said.

He also urged residents of mining communities to take advantage of the alternative livelihood programme that had been introduced by the government, especially the oil palm plantation project, to create jobs for themselves.

The Queen mother of Odumase, Nana Yaa Koah III, said the launch of the CMS was a big relief to the people, noting that it would revive the local economy.

The Asante Akyem Central Municipal Chief Executive, Mrs Susan Akomea, said 4,000 people had been registered across the municipality to participate in the CMS.

She said plans were underway to get more concessions for the remaining residents.