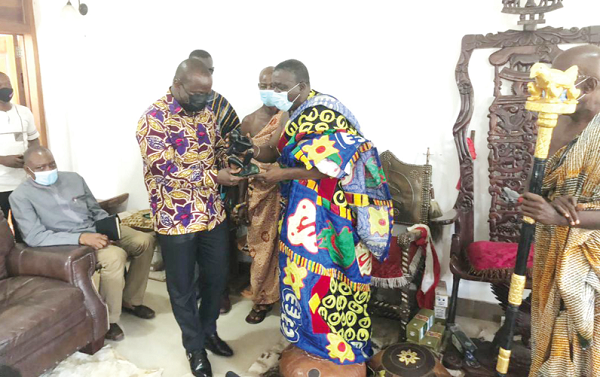 The Paramount Chief of Essikado Traditional Area, Nana Kobina Nketsia V, has pledged his unflinching support to the fight against illegal mining (galamsey) in the Western Region and other parts of the country.

He said the impunity with which the illegal miners were degrading the environment had got out of hand and that the time had come for all to lend their support, irrespective of one’s political colours and social status.

“This is not a fight for a particular person or the ministry and government. It is a national fight and for that I pledge my unflinching support,” the Omanhene stressed.

Nana Nketsia made the pledge when he welcomed the Minister of Land and Natural Resources, Mr Samuel Abu Jinapor, to his palace yesterday.
Mr Abu Jinapor called on the paramount chief as part of activities of his three-day tour of the Western Region to engage stakeholders in the fight against illegal mining.

Nana Nketsia said the move by the minister of lands and natural resources to call on traditional authorities in the regions and seek their support to deal with the galamsey challenge facing the country was in order.

Mr Jinapor, as part of the tour, had earlier had frank engagements with the regional and district security councils to discuss the way forward, before calling on Nana Nketsia V.

Also, Mr Jinapor, who is the Member of Parliament for Damongo, will interact with the mining communities in Tarkwa before proceeding to inspect Mineral Development Fund (MDF) infrastructural projects at the University of Mines and Technology.

The Essikadomanehene said the hipper polarisation of the country, which had become a source of worry to him and many others, was seriously allowing certain unacceptable activities to fester.

He emphasised that just like fighting anything illegal, the fight against galamsey required the support of all to stem it, if not, “ the country and the next generation will be the biggest losers.”

Nana Nketsia said the much talk about Ghana was all about its landmass and its sanctity, therefore if the country lost the fight against those degrading it then “we will be in serious trouble.”

He said as if the impact of illegal mining was not disturbing enough, illegal chainsaw operators were also destroying tree species in an unsustainable manner, “as if there are no rules governing that and it is the reason why, as a matter of urgency, they must be stopped.”

Naturally, he said, land had topsoil that fed the nation and the world as a whole through agriculture, however, the illegal mining activities had destroyed the topsoil and continued to pollute the river bodies as well as wanton degradation of forest revers, which must stop.

The paramount chief reminded the minister of a tough task ahead, but urged him not to be discouraged as he had the support of well-meaning Ghanaians

“What we need now is a broad based national effort that will have the support of our noble chiefs and community elders in a non-partisan dialogue to ensure that the country’s resources are exploited in a safe and regulated manner to the advantage of the people,” he said.

The minister was of the view that in order to ensure that the fight was won, there was the need to touch base with agencies under his ministry to ascertain at first-hand, information about what was happening in the sector and to bring everyone on board.

The Western Regional Minister, Mr Okyere Darko-Mensah, assured the minister of the Regional Security Council’s commitment to the fight against illegal mining activities, which, he said, had bedeviled the region.

“Let me assure you that the team in the Western Region is committed and we will support you and the dream of the President to bring to an end the environmental degradation and the show of impunity by perpetrators of these illegal activities,” he said.