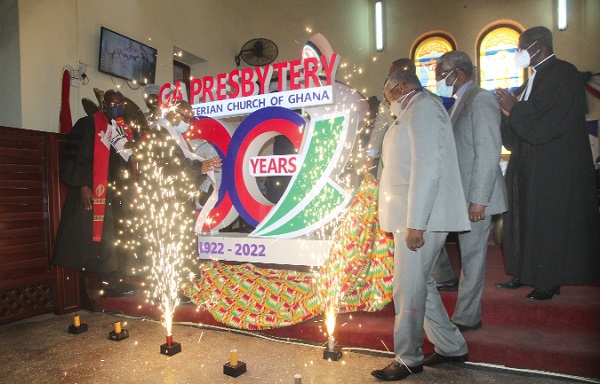 The Ga Presbytery of the Presbyterian Church of Ghana (PCG) last Saturday held a youth rally and musical festival as part of its year-long 100th anniversary celebrations.

The anniversary was launched in January this year.

Held at the Victory Presbyterian Church at Adentan in Accra, the colourful event was attended by hundreds of young people from children groups and youth wings of various congregations within the presbytery.

The rally and musical festival measured up to its name with worship and praise sessions firing up the gathering, and was complemented with song ministrations, as well as choreography performances.

The Chairman of the Centenary Celebration Committee and District Minister for Kaa Jaanor, Rev. Isaac Quist, said the rally and musical festival was a way to recognise and appreciate the youth’s role in the development of the presbytery.

“Ga Presbytery is a 100 years old, and we are not leaving the youth out of the celebrations, so this entire event was created specifically for the youth because we are grateful for what they have done for us,” he said.

Rev. Quist added that the participation of the youth in developing the presbytery was something to stand on in order to move forward.

“We can only do that when we are united and we are in faith together so that posterity will also come and meet something to celebrate,” he said.

Rev. Quist also urged the youth to remain disciplined in all aspects of their lives.

“Nowadays, we are saying there’s development, but it appears the indiscipline in our society is on the rise, so I want to use this to ask the youth to refine their character,” he said.

He further urged the youth to work hard in trying to earn a living and avoid trying to “get rich quick” by any means possible.

“You cannot get money without hard work, therefore, the youth who want to get money quick at all cost, by foul or fair means, should stop,” Rev. Quist said.

The Ga Presbytery is one of the five foundational presbyteries formed in 1922 after the Basel Mission — now the PCG — decided to reorganise its administration structure.

The presbytery has since given birth to two other presbyteries — the Dangme Tongu Presbytery, formed in 1972, and the Ga West Presbytery, created in 2016.

Currently, the Ga Presbytery is one of the biggest in the PCG, with 24 districts under its jurisdiction.

The centenary anniversary has been dubbed: “Grateful for our heritage: Forging ahead in unity and faith”.

Other activities lined up for the year-long anniversary celebration are symposiums, a heritage trail, quizzes, sports and public lectures, with the climax on December 18 when the entire Ga Presbytery will meet at the Black Star Square for a thanksgiving service.