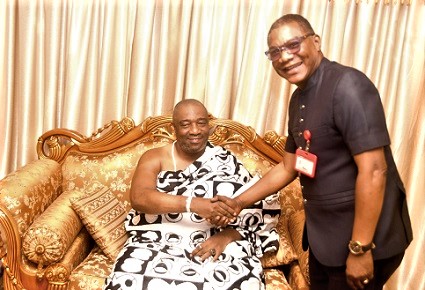 The Ga Mantse, King Nii Tackie Teiko Tsuru II, has pledged his commitment to ensure unity in the Ga State and restore it to its lost glory.

He has also expressed his readiness to support the youth with the necessary skills to enable them to contribute effectively towards the development of the area.

“I will not sit and watch the Ga State go down. I want to ensure that it takes back its former glory; if for nothing at all, for the sake of tomorrow,” he added.

King Teiko Tsuru II gave the pledge when the Editor, Graphic, Kobby Asmah, paid a courtesy call on him at his residence in Accra.

Others were the Head of Communications and Protocol at the Office of the Ga Mantse, Sylvester Parker-Allotey; the Head of Media, Nii Lante Bruce and Lloyd Evans, a media consultant; the Chief of Staff, Justice Julia Naa Yarley Sarkodie-Mensah, and Rev. Duke Yartey.

The visit was to strengthen the relations between the Graphic Communications Group Limited (GCGL) and the Ga State for their mutual benefit.

The Ga Mantse mentioned the educational sector as one of the areas where the Ga State had lost its dominance and said it was a glory that needed to be restored.

“Some decades ago, we had Ga lawyers and Ga judges, but how many of them do we have now? Is the story the same?

“When you go to the medical schools now and ask for the number of Ga students, the answer is nothing to write home about.

For me, these are some of the things I want to work on.

“It is my aim to make sure the little child in the Ga State has a better future, so that he or she will not miss the ladder of success when others are climbing,” he added.

King Teiko Tsuru  II acknowledged the fact that it would not be an easy journey.

“Good things take time to be accepted; a lot is going on in the Ga State, but I believe we will get there; I believe that. We will take it a step at a time, little by little, day by day and we will finally arrive. Everything good takes time.

“I am happy the Graphic team is here; we appreciate your visit,” he said.

Mr Asmah said his outfit would continue to deepen relations with the Ga State and also ensure that the world heard and saw the good works of the people.

“There are so many good things happening in the state that people do not know about and that is why we are here.

“The king has done a lot of commendable things, such as organising skills training programmes for the youth and health screening exercises for the people, since taking over the mantle of leadership,” he added.

Mr Asmah said the Daily Graphic was the only media house that continued to chronicle events in the country, and that it would ensure that happenings in the Ga State were not left out.

“We are grateful you opened your doors to us; we do not take that for granted,” the Editor added.