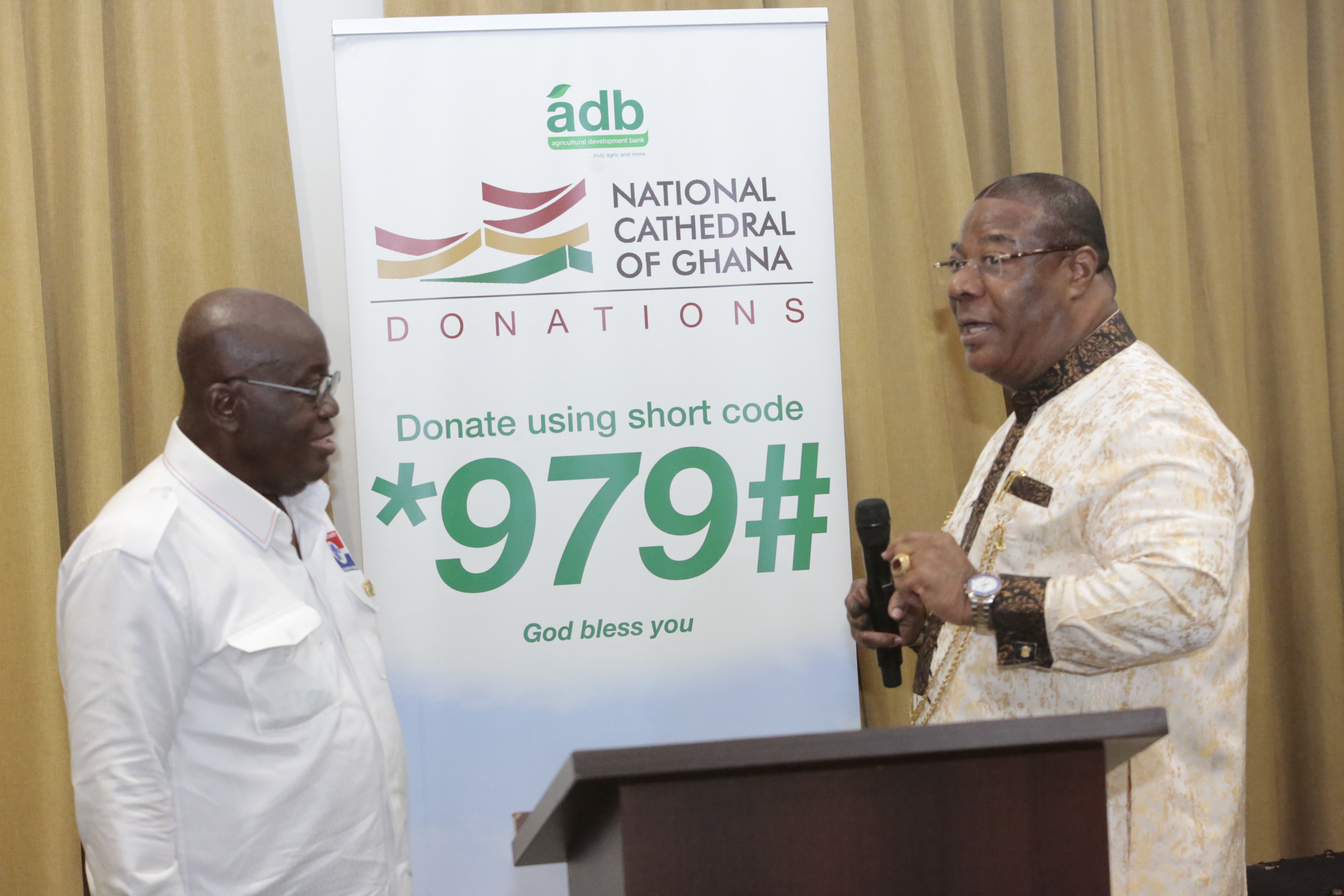 President Akufo-Addo launching the Cathedral Donation Code, while Archbishop Nicholas Duncan-Williams, member of the Board of Trustees of the National Cathedral, looks on. Picture: Samuel Tei Adano
30.5k Shares

President Nana Addo Dankwa Akufo-Addo last Wednesday launched a fund-raising short code, *979#, to enable people to contribute towards the construction of the National Cathedral, an initiative of the clergy.

He described the idea of securing funds via unstructured supplementary service data (USSD), a global system for mobile communication to send and receive text messages of financial transactions, as laudable and deserving of applause.

"I am very grateful to all the men and women of God who have pioneered this enterprise and are making the project work, especially members of the National Cathedral Board of Trustees who have led the enterprise with great enthusiasm and commitment," he said.

He also commended the clergy for their commitment to the project.

The President said he was firm in his determination to bring the project to fruition, adding: "I remain indifferent and impervious to it. I have no shame at all to state that I am a Christian in politics and, therefore, have no hesitation in supporting this cathedral project.”

He said he would meet with the members of the board of trustees and take a decision on a replacement for its Chairman, Rev. Dr Samuel Asante-Antwi, who has passed on.

A member of the board responsible for fundraising, Archbishop Nicholas Duncan-Williams, said just as Prophet Nehemiah in the Bible endured criticism and opposition in his quest to build a House of God, so also had the construction of the cathedral faced some opposition.

He said advocates for the construction of the cathedral would suffer from lack of cooperation, misrepresentation of issues and speculations.

"I am saying this to the trustees and to the dreamer of the project, President Akufo-Addo, and to all gathered here hearing the sound of my voice, that we must be brave, because there will be mockery and it is something we cannot avoid," the Archbishop added.

The Secretary to the board of trustees, Rev. Victor Kusi Boateng, made a case for public support for the project.

“President Akufo-Addo's genuine heart’s desire to build God a House must motivate every Christian to support its construction,” he said.