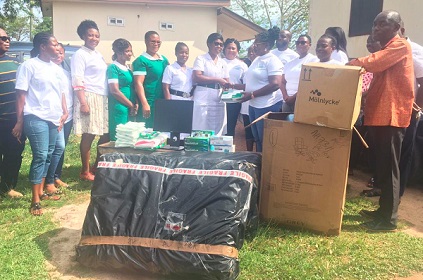 Victoria Otoo Aidoo (3rd from right), the Director of Ellis Mothers Hope Foundation, presenting items to an official of the Saltpond Government Hospital as part of the launch
30.5k Shares

Vulnerable mothers in the Mfantseman municipality can now receive support through the Ellis Mothers Hope Foundation.

The foundation, initiated by a native of Saltpond resident in the United Kingdom, Victoria Otoo Aidoo, identifies needy and vulnerable mothers for support through the Saltpond Government Hospital.

Speaking to what informed the foundation, Ms Aidoo, who is the director, said she was moved with compassion to set it up to support mothers in need during the COVID-19 pandemic.

She explained that pregnant women who came to antenatal clinic with dire, special, sometimes critical, physical and medical needs were selected after a needs assessment and supported through birth to three months after birth.

So far, she said three mothers had received support with various medical and other financial needs.

The Municipal Chief Executive for Mfantseman, Ike Lord Enu, thanked Ms Aidoo for the gesture, saying that the items would go a long way to promote the well-being of needy mothers.

He called on the Ghana National Petroleum Commission (GNPC), to honour its promise of building an ultra-modern medical facility at the Saltpond Government Hospital before the completion of the decommissioning of the Saltpond Oil Fields.

The MCE indicated that as part of arrangements for the community, the GNPC had agreed to build a modern health facility at the hospital to promote efficient health delivery services.

He said the paperwork and land were ready and it was important for the GNPC to honour its promise before the decommissioning exercise ended.

He pledged on behalf of the assembly to support the infrastructure needs of the hospital.

The Deputy Chief Administrator of the hospital, Paul Amponsah Agyakwa, said the hospital had only one incubator which was woefully inadequate.

He noted that many women came to the hospital with virtually nothing to give birth and the nurses had to support them from their personal finances.