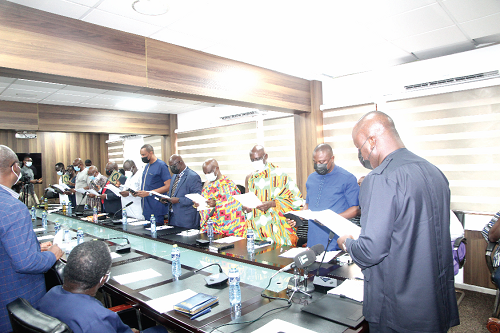 Mr Samuel A. Jinapor (right), Minister of Lands and Natural Resources, swearing in the new board members of the Forestry Commission. Picture ESTHER ADJEI

The Minister of Lands  and Natural Resources, Mr Samuel Abu Jinapor, has charged the new board of the Forestry Commission (FC) to devise a policy and strategy to sustain the Green Ghana programme that the government rolled out this year to restore degraded lands and forests.

He said the restoration of degraded forests and the preservation of forest resources were crucial matters because they had consequential impact on efforts to develop the national economy.

"Matters to do with the recovery of our forests, climate change and ecosystems are big ticket issues of the world; and they are as important as our effort to develop our national economy," he stressed.

The minister was speaking at the inauguration of the FC Board in Accra yesterday.

The 11-member board is chaired by the Paramount Chief of the Wassa Amenfi Traditional Area, Tetrete Okuamoah Sekyim II, who is one of the President's nominees to the board.

Members of the board comprised three other nominees by the President — Mr Kenneth Amankwah, Mr Mahmoud Nassir-Deen and Nana Akosua K. Agyemang-Prempeh — as well as Alhaji Sulemana Mahama, the Executive Secretary of the Lands Commission; Mr John Allotey, the Chief Executive Officer (CEO) of the FC, and Katakyie Bumangama, a representative of the National House Chiefs.

The others are Professor Samuel K. Oppong from the Ghana Institute of Professional Foresters, Mr Richard Duah Nsemkyire from the Timber Trade Industry, Mr Gustav Alexander Adu from the non-governmental organisations (NGOs) involved in forestry and wildlife management and Mr George Wireko-Brobby from the wildlife trade and industry.

Mr Jinapor urged the members of he board to be diligent and work hard to deliver on the mandate bestowed on them.

"The government has taken bold steps to recover our forests, even when there was no board for the commission. Now that you have been appointed to serve on this board, you will take up the responsibility of devising a strategy to ensure that we restore the forest cover," he said.

He said the protection of the forest was a priority of the government, and that "it is dear to the President's heart, for which reason we cannot disappoint him".

The minister also asked the board to adhere to good corporate governance principles and the delineation of roles to avoid friction with the CEO and the management of the commission.

"Clear corporate governance principles should be followed to ensure that there is a distinction between the roles and responsibilities of the board and those of the CEO and the management," he said.

Mr Jinapor also asked the board members and the management of the FC to coordinate their efforts towards achieving the common goal of protecting the environment.

In his acceptance speech, Tetrete Okuamoah-Sekyim assured the minister that the board would leverage the experiences of its members to deliver on its mandate.

"We will develop a framework and work with other stakeholders to manage our forest resources," he said.