Fisheries Ministry, others team up to flush out illegal fishers 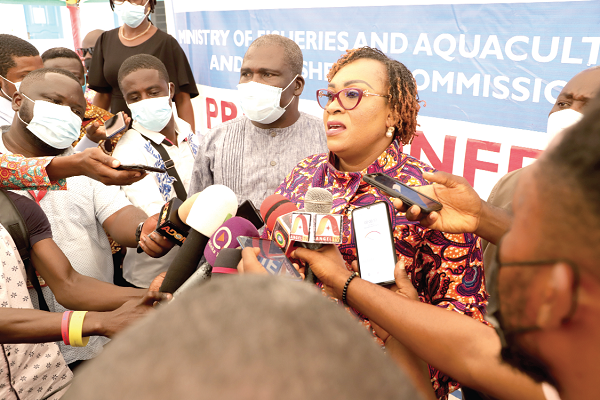 The  Ministry of Fisheries and Aquaculture Development has teamed up with the Marine Unit of the Ghana Police Service and the Ghana Navy to flush out illegal fishers from the country's maritime space.

The move also forms part of measures by the ministry to deal with fishers who fail to strictly observe the 2021 closed fishing season.

Illegal fishing activities include trans-shipment, popularly known as Saiko, the use of poisonous and toxic chemicals such as dynamite, explosives and powdered soap, including unapproved nets for fishing, among other methods.

The Minister of Fisheries and Aquaculture Development, Mrs Hawa Koomson, said this at an event in Accra yesterday to declare the closed fishing season for this year.

In 2016, the ministry and the Fisheries Commission, in accordance with section 84 (1) of the fisheries Act, 2002 (Act 625) and the Marine Fisheries Management Plan (2015-2019), implemented the closed fishing season to protect depleting fish stock in the country.

As a result, the first closed season was observed in 2019.

It could not, however, be observed last year due to the COVID-19 pandemic.

The exercise was based on scientific advice and extensive consultation with stakeholders in the fisheries sector, the minister said.

The term "closed season” or “biological rest period" refers to the stopping of fishing during the spawning period of the fish.

Excessive fishing pressure, engagement in illegal, unreported and unregulated fishing activities, among others, have resulted in the decline of the country's total fish landings over the last decade.

Mrs Koomson said efforts were underway to procure four patrol boats for monitoring, control and surveillance activities on marine waters and warned fishermen along the coastlines to desist from engaging in illegal fishing activities or risk facing the law.

According to her, illegal fishing activities could overturn the benefits of the fisheries sector "if no action is taken”.

"It is important that the necessary measures are put in place to reduce excessive fishing pressure and for the recovery of over-exploited fish to rebuild the depleted fish stocks," she said.

The fisheries sector, the minister added, played an important role in the development of the nation in terms of job and wealth creation and food and nutrition security.

She said the sector currently supported the livelihood of three million people along the fisheries and aquaculture value chain.

The Executive Director of the Fisheries Commission, Mr Michael Arthur-Dadzie, demonstrated the use of a device that would be used to test the freshness of fish at the various beaches after the closed season as a measure of checking illegal fishing.

"With this device, we will know if you used powdered soap, dynamite or any explosive to fish," he said while displaying the Tory meter device.

The acting president of the National Fishers Association of Ghana (NAFAG), Mr Simon Agah, urged members to strictly observe the closed season, saying “the closed season has come to stay with us and we must help make it a success".

The president of the Ghana Industrial Trawlers Association (GITA), Mr Stephene Adjokatcher, appealed to the sector minister to ensure that the payment of licensing fees during the two months of the closed season for trawl vessels was scrapped.