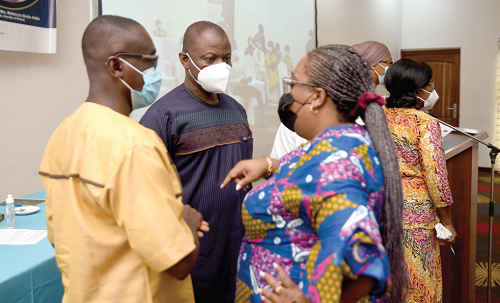 It is known as the Childhood Cancer Society of Ghana (CCSG) and its establishment was facilitated by the two main childhood cancer treatment centres in the country, Korle Bu Teaching Hospital and Komfo Anokye Teaching Hospital.

Inaugurated in Accra yesterday by the Ghana Health Service (GHS) and the Office of the First Lady, Mrs Rebecca Akufo-Addo, the society aims to ensure early detection and unimpeded access to quality care throughout the continuum of life for affected children and their families.

The CCSG is being described as a multidisciplinary team working in collaboration with other stakeholders in the management of children with cancers, including the provision of holistic support for families of affected children.

Data available to the GHS suggests that although childhood cancers were curable, when detected early, four out of every five affected children in low and middle income countries, including Ghana, die due to late reporting, high cost of treatment and insufficient diagnosis at the primary healthcare level, among many other reasons.

Speaking at the inauguration, the Director-General of the GHS, Dr Patrick Kuma-Aboagye, applauded the initiative, indicating that it would go a long way in improving the national childhood cancer situation.

He said currently the country did not have comprehensive epidemiological data on the magnitude of childhood cancers, but it had been estimated that about 1 in 500 children will be affected by 15 years of age.

He said it had also been estimated that 1000 children were affected annually but unfortunately only 30 per cent of the affected children received any form of treatment due to the cost of treatment, insufficient diagnosis ability, among many other factors.

“These statistics undoubtedly raise the question of access to childhood cancer care or treatment. Currently, the country can boast only two childhood cancer treatment facilities — the main teaching hospitals of Korle Bu and Komfo Anokye — and only recently the Greater Accra Regional Hospital,” Dr Kuma-Aboagye said.

He said early detection was life saving for children, and called on all parents not to take signs or any changes they see in their children for granted but should always seek early treatment or medical opinion on time.

Addressing the event virtually as the keynote speaker, Mrs Akufo-Addo said the setting up of the CCSG was long overdue.

She said although significant strides had been made in reducing child mortality, the lives of surviving children were being threatened and claimed by non-communicable diseases such as cancer, referring to statistics that indicate that under-five mortality in the country had gone down from 127 out of every 1000 live births in 1990 to 46 out of every 1000 live births in 2019.

“To tackle this requires a collaborative multi-stakeholder effort. The Childhood Cancer Society of Ghana, a professional society of health workers and other stakeholders who are directly involved in the management of children with cancers, has a leading role to advocate and ensure that affected children are able to access effective quality lifesaving care wherever in the country,” she said.

Childhood cancer is a term used to describe cancers that occur between birth and 15 years of age.

They may differ from adult cancers in the way they grow and spread, how they are treated and how they respond to treatment.