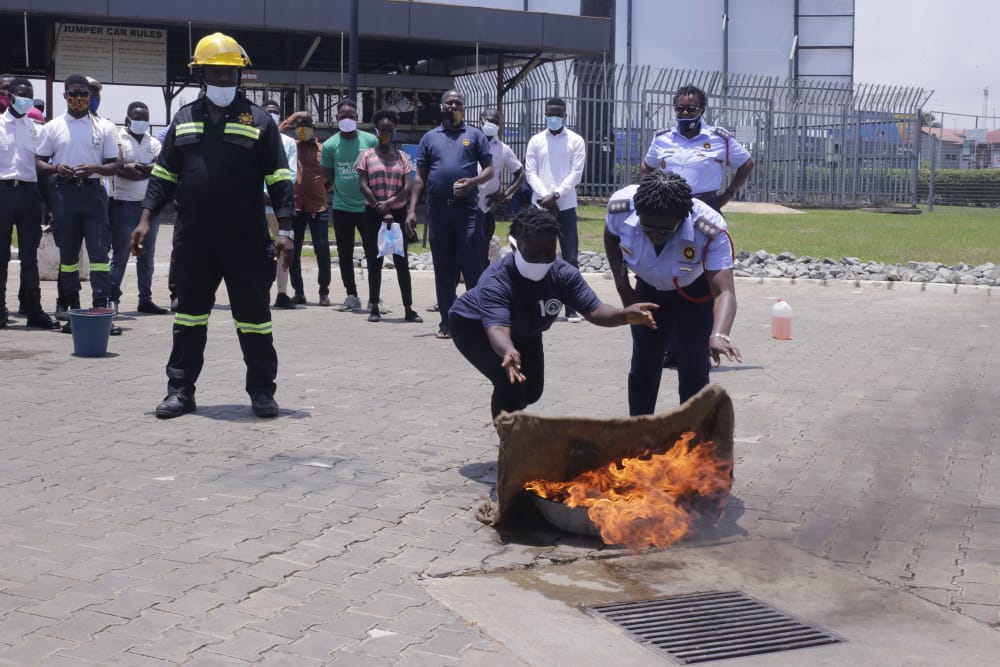 The Management of the Junction Mall at Nungua, together with the Ledzokuku Municipal Fire Command has organized a fire training and simulation exercise for tenants and workers at the mall.

In an interview with Graphic Online, the Operational Manager of the Junction Mall, Paa Kwesi Coleman said the purpose of the exercise was to educate its tenants about good fire practices and prevention methods and also keep them abreast with the latest techniques of fire fighting and management services.

The annual exercise, he said, formed part of the facility's safety approach for both workers and patrons of the mall.

The exercise, according to him has been beneficial to both management and tenants of the mall.

He indicated that the management of fires is a shared responsibility that needs to be undertaken by everyone.

"We all have a stake in ensuring a fire safety regime within our communities and country at large," he said.

The Municipal Fire Officer (MFO), of the Ledzokuku Municipal Assembly (LEKMA), Divisional Officer One (DOI) Theophilus Dangbe said his outfit had partnered the Junction Mall in organizing fire training and simulation exercise since the inception of the mall.

The training, he believes has been the reason the facility has not recorded any major fire outbreak.

The MFO who commended the management of the mall for taking proactive measures against fire, encouraged other organizations to emulate the junction mall.

Touching on fire outbreaks with the Ledzokuku Municipality, DOI Dangbe mentioned that his outfit has reduced fire outbreaks in the municipality by close to 60 percent compared to last year's figures.

The MFO said his outfit had recorded 46 fires between January and August this year as compared to the 108 fires recorded within the same period last year, and said it was their belief that the intensive education organised by his outfit had yielded that result.

DOI Dangbe said his outfit adopted a house to house campaign to educate residents with the municipality on good fire practices and prevention methods. He said the command adopted this approach of reaching out to educate residents to reduce fire outbreaks that occur as a result of ignorance and carelessness.

He indicated that the majority of the 46 cases recorded within the period were domestic fires, which are usually caused by misuse of Liquefied Petroleum Gas (LPG) in homes, and followed by electrical fires.

The MFO who advised residents to be cautious with the use of LPG and electrical gadgets said, the command recorded zero fire outbreak in the month of March which hitherto used to be a peak period for fire outbreaks.

He said the Municipal Fire command will continue with its education program and called on all stakeholders, including the government to remain committed to providing the needed logistics, including vehicles and protective clothing, for all firefighters to boost their work and make them effective in their service delivery.