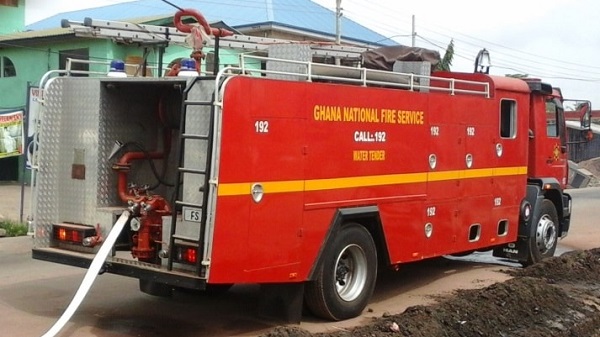 The Ghana National Fire Service (GNFS) insists that the service will never dispatch fire tenders without water in them during fire outbreaks
30.5k Shares

The Ghana National Fire Service (GNFS) insists that the service will never dispatch fire tenders without water in them during fire outbreaks, and has debunked suggestions that occasionally it has attended to distress calls ill-prepared and unable to effectively deal with fire outbreaks.

It is very common for victims of fire outbreaks to take a swipe at personnel of the GNFS for supposedly moving their fire trucks without water or other firefighting liquids and appropriate tools to scenes of fire outbreaks, where they have struggled to put out the inferno.

The latest backlash against the GNFS came last week Wednesday when fire gutted the Odawna Shopping Mall at the Kwame Nkrumah Circle in Accra. The fire, which was reported to have started about 1 a.m., razed down hundreds of stalls. It took personnel of the GNFS over two hours to bring the situation under control.

Aside from the destruction of goods and properties of the traders in the market, there was no reported casualty.
Reacting to this assertion, the Head of Public Relations of the Ghana Fire Service, Mr Ellis Robinson Okoe, told The Mirror in an interview that their fire trucks did not move from their stations without water and other appropriate firefighting equipment.

“There is no logic to move to a place with trucks without water in them as you often hear a section of the public claiming. Even some of our trucks which have broken down still have water in some of the tanks standing at the head office, so why would we dispatch trucks on firefighting missions without water in them?” he queried.

According to him, the primary purposes of a fire engine included transporting firefighters and water to an incident, as well as carrying equipment for firefighting operations.

“Our trucks mostly carry between 3,000 and 4,000 gallons of water any time we receive distress calls of fire outbreaks. This water is spilt within eight minutes depending on the intensity of the fire. For instance, during the fire outbreak at the Odawna Market last week, after spilling all our water and the fire was not coming down, we had five water tankers coming from Ghana Police Service, Ghana Air Force,

National Security, Prison Service and the Fire Service who came to assist our men on the ground,” he explained.

He hinted further that most of the fire hydrants in town had been covered by structures such as kiosk and container shops, making it extremely difficult for fire personnel to get water in times of crisis. “The hydrants are devices for extracting water from pipelines and water distribution systems. In the event of a fire, a hydrant can ensure fast water supply. The connections to the pipes are tapped with so-called hydrant wrenches and hydrant standpipes and are further connected to the fire trucks.

“Some of the hydrants we have around town are fast while others are very rusty and slowly. For example, the hydrants at Farrisco and Ring Road are very good and the pressure level is equally excellent. In other jurisdictions, at every 100 metres you will find hydrants, but in Ghana the story is different; therefore, we have to depend on the tankers to supply water when there is a fire outbreak,” he stated.

Delays in calling GNFS
Mr Okoe said sometimes, in an attempt by people to put out fire in their homes, markets or offices, they ended up not calling the GNFS on time, and by the time the fire personnel were called to come and quench the fire, lives and property might have been destroyed, yet they would turn around and accuse the GNFS of delaying in turning up.

“In the case of the recent fire at Odawna for instance, our investigations show that the fire started somewhere around midnight but we had the distress call at 2:30 a.m. The time difference shows they attempted to put out the fire initially,” he said.

He explained that for a place like the Odawna Market, the original plan was to build wooden sheds for the traders, but now there were only metallic containers at the place. “The last time the same market got burnt, we made certain recommendations to them, yet they haven’t implemented any of the things indicated. People have done illegal electrical connections. You can find about four people tapping from one source of power, and this is dangerous as it can easily cause a fire,” he said.

Monitoring mechanism
When asked why a place like the Kaneshie Market or Adabraka Market was hardly in the news for such fire outbreaks, he said, “Such markets have task forces trained by the GNFS who go round to check naked fires left unattended and the culprits are fined for such negligence.

Unfortunately, Odawna doesn’t have any monitoring as suggested to them by the GNFS to help curb such fires.”

He urged the municipal assemblies and market queens and kings to find dedicated people who can monitor the activities of some of these traders, especially those who cook in the market, tap electricity illegally or burn things indiscriminately in the heart of the market.

“It is important to have fire extinguishers so that when the fire starts, they can use the extinguishers to bring the fire under control, while they request the assistance of the GNFS to also come and completely kill the fire,” he indicated.