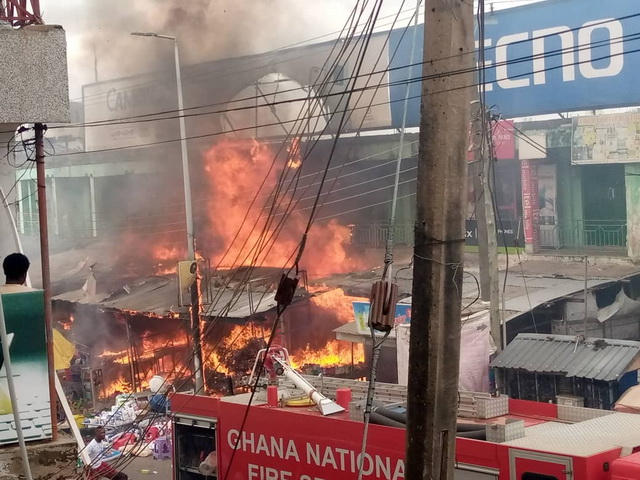 Fire Tuesday morning destroyed a number of shops in the central business district (CBD) of Koforidua, Eastern Region, ravaging several shops before a spririted effort by the Ghana National Fire Service, put out the fire.

Traders who lost their wares to the fire were seen wailing at their loss, but many others who sell on table tops and could whisk their wares to safety were seen shuttling across nearby streets with their goods.

The fire reportedly started at about 10:00am with a sudden little spark which spread quickly and destroyed a number of provisions stores in the storey building housing a number of businesses including the local branch of the Upper Manya Krobo Rural Bank Limited.

Volunteers had on their own tried unsuccessfully to douse the fire before the arrival of the fire personnel with two fire tenders. It took the firefighters close to an hour to quench entirely the fire that had already ravaged several shops. 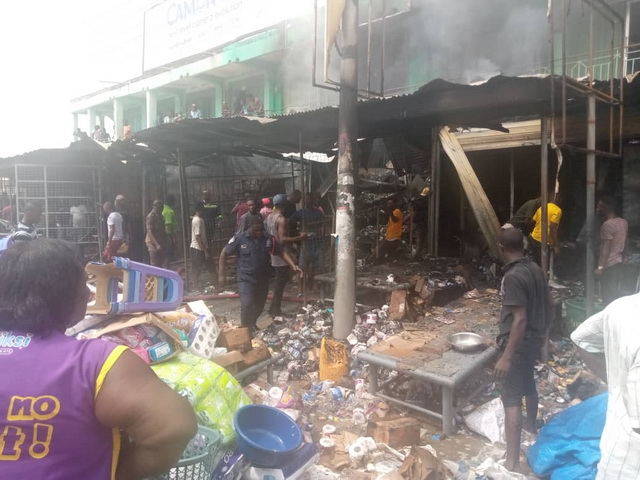 Eye witnesses
There were contradictory accounts of how the fire started, with some eyewitnesses claiming it started from a shop which was yet to open for the day's business, while others including Maame Connie, a petty trader, claimed the fire started from an electrical pole, which subsequently led to a spark in one of the provisions shops on the ground floor of the storey building.

Impact
The incident brought trading activities to a stand still with people who had parked their vehicles (cars) by the road running helter-skelter for dear life. The bank also closed temporarily, reopening later when normalcy was restored.

The Electricity Company of Ghana (ECG) also switched off power, while the police barricaded the area to protect the remaining property of shop owners from being looted.

Victims
Some shop owners were seen wailing over their loss as they virtually lost everything to the raging fire.

Ms Regina Obuobi, a victim in an interview with the Daily Graphic said she lost all her goods and her sister's cash of GH¢10,000.00 and several items kept in the shop the day before to the fire. She appealed to the government to come to their aid to salvage their businesses.

Investigation
Addressing the media after the disaster, the Eastern Regional Public Relations Officer (PRO) of the GNFS, Assistant Divisional Officer 1 Ignatius Kwamena Baidoo said the cause of the fire outbreak could not be established immediately as further investigation would be conducted into the incident.