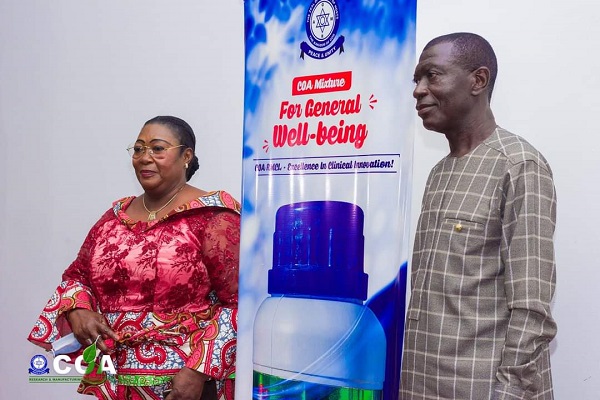 The COA Food Supplement, a product of the Centre of Awareness (COA) Global Peace Mission, has been reintroduced on the market as a herbal medicine for enhancing the general wellbeing of users.

This follows its approval by the Food and Drugs Authority ( FDA) after intensive research into the herbal product.

Formerly COA FS, the product is now known as COA Mixture under the current FDA authorisation with the same ingredients but improved efficacy.

The Executive President of the COA Global Peace Mission, Professor Samuel Ato Duncan, said on September 10, this year, that the FDA gave the centre the market authorisation to distribute COA FS as COA Mixture since it was no more registered as a food supplement, but as a herbal medicine for general wellbeing with the same ingredients.

The FDA on April 17 ordered the recall of COA FS from the market due to microbial contamination.

Subsequently, a batch containing 692 boxes of COA FS, costing GH¢1.69 million, was destroyed by the FDA in Cape Coast.

“We want to state that COA Herbal Centre is committed to delivering quality, effective, efficient and efficacious products to consumers and will, therefore, comply with all directives by the FDA,” he said.

COA FS has been very popular in the country and in the overseas, it is acclaimed as having high efficacy.

Prof. Duncan said the centre had instituted some interventions to improve on its production and product safety and mentioned them to include giving its old factory a GH¢10-million facelift to enable it to meet international standards to enhance product safety.

In addition, a new automated equipment to reduce human contact and had also been installed to improve quality.

“Installation of security structures to prevent possible contamination; employment of technical and non-technical staff to improve quality; training of staff by the FDA on Good Manufacturing Practices (GMP) have been completed to boost product safety,” the executive president said.

Prof. Duncan said all the interventions were executed within four months to enable the centre continue to serve the public with quality herbal medications.

He said the centre had incorporated a new company, COA Research and Manufacturing Company, which was now responsible for producing COA Mixture to facilitate further research into the products and new ones to support healthcare delivery in the country.

He said the new company would explore the world of medicines and produce efficacious medicines to support the health sector, both home and abroad.

He said COA products which was previously COA FS and now COA Mixture has been improved and relaunched.

“I am proud to announce that the re- launch wouldn’t have been successful without the FDA, which have consistently been with us throughout the restructuring of the factory to get it to the best of standards and to produce a good quality product; COA Mixture. We couldn’t have done it without you, the FDA.

“I am also happy to announce that within 10 days in August 2020, I received three international awards. This should tell you that even though our products were off the market, we were assessed by reputable international institutions. Special thanks to: Academic Union Oxford, UK for honouring me with a Professorial Award; World Confederation of Businesses in USA for honouring me and my company with the most prestigious International Business Award and West Africa Nobles Forum for their award which I’m yet to receive on October 22, this year,” he stated.

He expressed special thanks to the media for their support, saying “to the media, I cannot describe how your support in times like these have encouraged us as a Ghanaian company to keep on doing our very best for this country. Thank you so much.”

“The Centre of Awareness Global Peace Mission has for more than 15 years developed an organic antiviral medicine that has three dimensional effects to combat a wide spectrum of viral infections and has qualified for clinical trials in Ghana,” he said.

Prof. Duncan said the oral administration stimulated the immune system to naturally fight against viruses; intramuscular administration diffuses into cells and tissues to mop-up or smoke-out viruses living in latently infected cells into the bloodstream where they could be targeted and killed as in the case of HIV.

He said COA products were purely organic or plant based and had no chemical bases and, therefore, had insignificantly low levels of side effects.

In March, this year, the Director of the Noguchi Memorial Institute for Medical Research, Prof. Abraham Kwabena Anang, confirmed that the institute had commenced clinical trials for the COA FS medicine now COA Mixture for possible export.

He said COA FS was one of the most important medicines in Ghana which fortunately the government of President Nana Addo Dankwa Akufo-Addo had asked the Ghana AIDS Commission to provide a platform to ensure that it was properly tested and assessed.

Prof. Anang noted that the research institute had commenced the process which included other stakeholders such as the FDA, the Ghana Standards Authority and the Centre for Plant Medicine Research.

Some few weeks after COVID-19 was declared a global pandemic by the World Health Organisation and Ghana recorded its first two cases on March 12, this year, the centre appealed to the government to conduct further scientific study into COA Mixture to scientifically confirm the potential of the product in suppressing the coronavirus to boost national preparedness to prevent an outbreak of COVID-19 in the country.

At the time, Prof. Duncan said COA was undertaking further scientific investigations locally and internationally to establish its efficacy to cure the Human Immuno-deficiency Virus (HIV) and other viruses and evidence showed that the herbal mixture could be a potential solution to COVID-19.

He said the centre’s appeal to the government was premised on the fact “We sent some of the COA products to China and information reaching us indicates that, there has been a significant improvement in the condition of some infected patients who were given COA products. Even though it is good news, it is not scientific hence not conclusive.

He said that was why due to the cost involved in such scientific investigations and authenticity of outcomes, the centre appealed to the government to leverage on its national and international capacity to conduct further research on the COA to confirm that potential clinically.