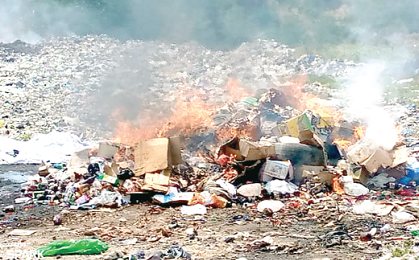 • The goods being destroyed
30.5k Shares

The Central Regional Office of the Food and Drugs Authority (FDA) has disposed of unwholesome goods worth GH¢214,000.

The items which included food, cosmetics, pharmaceutical products, chemical substances and mechanical devices  were disposed of at the Nkanfoa landfill site last Friday.

The goods, all weighing about 2.3 tonnes, were seized from routine market surveillance activities in warehouses, pharmacies and supermarkets between June and December last year and others submitted voluntarily to the offices of the FDA for safe disposal.

The Central Regional Director of the FDA, Mr John Odai-Tettey, told the media that the FDA was working in the interest of consumers and was, therefore, committed to ensuring that sales outlets sold only wholesome goods to the public.

He said while the FDA was at all entry points into the country, including the borders, airports and seaports to make sure that all products brought into the country were wholesome and registered, there were also goods that were sometimes smuggled into the country through unapproved routes.

"Occasionally, some goods are able to beat Customs to get onto the shelves in shops across the country. Some of the smuggled goods expire quickly on the shelves because they were brought in close to their sell-by dates with some also going bad because they have been on the shelves for too long,” he explained.

Mr Odai-Tettey said it was for such reasons that the FDA occasionally undertook routine market surveillance to get rid of unwholesome goods in the system.

He said the public had been sensitised and educated to know they were not allowed by law to dispose of unwholesome goods by themselves.

"Some of the traders submit their unwholesome goods to the FDA to be disposed of safely on their behalf," Mr Odai-Tettey stated.

He advised the public to be extra cautious when purchasing goods, adding that the expiry date on a product was not the only determinant of its wholesomeness.

"There are goods which, according to the expiry dates, have not expired yet but are, all the same, not safe for consumption because they have not been properly stored.

“It is imperative, therefore, that consumers check for the wholesomeness of products before purchasing them," he said.