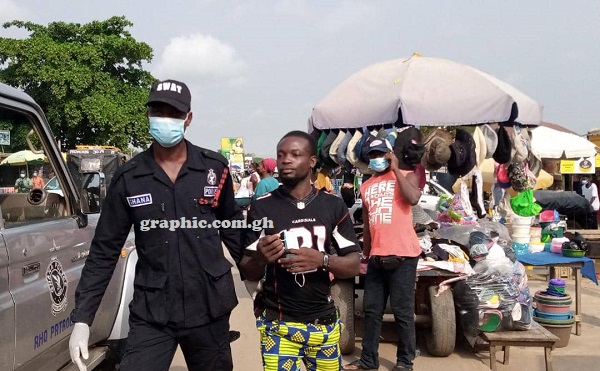 • The Police have arrested a gentleman without face mask at the Abura Market in Cape Coast
30.5k Shares

The Tema Regional Police have arrested 105 suspects for flouting the government's directives on the wearing of face masks as a preventive measure against the spread of COVID-19.

The arrest was carried out in a four-hour operation by the police last Wednesday, around Tema Community One, to enforce the directives on the observation of the COVID-19 protocols.

The acting Public Relations Officer of the Tema Regional Police Command, Chief Inspector Stella Dede Dzakpasu, told journalists that the suspects were going about their usual businesses regardless of the directives.

She said of the total number of people arrested, nine were women while 96 were men, all within the age bracket of 17 to 64 years.

"Out of the total number, 22 of them had no masks at all while 83 had the masks in their possession but refused to wear them. Some of the suspects called friends and relatives to bring them masks while under police custody," she said.

Chief Inspector Dzakpasu said the suspects will be interrogated and screened by the command, after which further action would be taken.

She urged the public to adhere strictly to the government's directives in order to curtail the spread of the virus.

During a similar exercise carried out in Cape Coast yesterday, about 100 people were arrested at various locations for their failure to comply with the directive on the wearing of face masks.

The operation was undertaken by the Regional Police Command and other district commands in the metropolis, including the Special Weapons and Tactics (SWAT) team, the Counter-Terrorism Unit and the Motor Traffic and Transport Department of the Police Service.

The arrested were sent to the regional police headquarters and their statements were taken.

The Regional Police Public Relations Officer, Deputy Superintendent of Police (DSP) Irene Oppong, said it was an offence for which suspects could be bailed and possibly cautioned.

The operation, she said, was held simultaneously across the region in reaction to the President's directive that all Ghanaians should wear face masks in public places.

A stampede occurred at the Abura Market and its environs over face masks as the police embarked on the operation to arrest people without face masks.

People hurriedly sought for face masks to purchase to avoid being arrested.

Others were, however, outraged by the action, saying it connoted double standards on the part of law enforcers.

Many complained about the laxity in enforcing the laws, especially during the electioneering campaigns, saying the exercise had no basis.

"They should be educating us to wear the mask and not arresting us like that,” one of them said.

“When they were having rallies we were part of the political rallies and we all knew that the coronavirus was still around. Why are we now being arrested?" others asked.

Meanwhile, sales of the mask immediately shot up as face mask sellers took advantage of the exercise to make quick profit.

DSP Oppong urged the public to do the right thing by wearing the face mask and said: "we all have been told that the wearing of the face masks will reduce the spread of the virus so all must adhere to the directive."