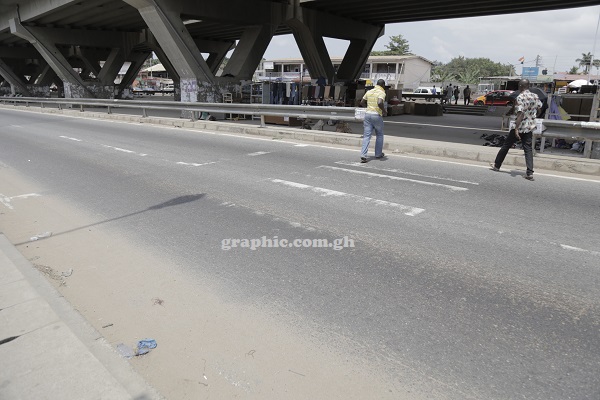 Faded street markings are becoming a grave danger to road users in the capital city, Accra.

The faded markings make it difficult for drivers to keep to their lanes, a situation which poses a risk to all road users.

Street markings, which are adopted globally as a road safety mechanism to help guide drivers and pedestrians on the proper use of roads, are conspicuously absent on some of the streets visited within Accra and on the highways connecting the city to other parts of the country.

As part of the traffic control plan, street markings provide visual guidance for road users and warn them when they are about to veer off their lanes.

They also signal motorists to slow down or avoid overtaking at particular portions of the road. Street markings have, therefore, become a common element of road infrastructure.

However, the situation on some roads in Accra paints a different picture.

A Daily Graphic team went on an observation tour and monitored the situation around the Tetteh Quarshie Interchange, Ring Road Central, Osu, Kaneshie, Awudome Estate, Teshie, Nungua, Dansoman, Achimota, Adabraka and Ridge, during which it became clear that most of the markings were faded or missing.

For instance, on the Ring Road Central, pedestrian crossing markings were off, just like the markings that indicated where a vehicle could branch off.

Also, at the Tetteh Quarshie Interchange, most of the markings that directed road users as to where to join the main road or exit it had all faded.

These include slip roads, which allow slow-moving vehicles to gather momentum before joining vehicles in speeding lanes.

Additionally, many of the white lines between driving lanes indicating when it was right to overtake or not were faded, making them partially invisible to road users.

It was, however, observed that many of the ceremonial roads and interlink roads in affluent communities had their markings newly embossed.

Areas in Accra such as East Legon, the Airport City and some areas within the Airport Residential Area had conspicuous markings on the roads and interlinks.

Again, on the Giffard Road bypass, which starts from the Burma Camp Junction through the Major Mahama Roundabout to Tse Addo, the team observed that there were permanent reflectors embedded in the medians, making driving in the night especially very conducive.

The situation on the roads with faded markings, the team observed, created chaos, especially at intersections during the rush hours.

At night or when it rains, the lines are virtually invisible, making it difficult for drivers to stay within their lanes, with some often drifting into other lanes.

Also, some of the intersections are yet to become pedestrian-friendly, as the team observed that they had faded or there were no zebra crossing lines, causing pedestrians to cross the road indiscriminately.

The Public Relations Officer of the Ministry of Roads and Highways, Mr Isaac Agyei Kwakye, admitted that the observation by the Daily Graphic on the poor state of road markings was a true reflection of the current situation.

“Every year, we are supposed to do remarking of the roads, but because of the coronavirus pandemic, we faced financial challenges and as a result we couldn’t award enough contracts in 2020 for the re-marking of roads,” he said.

The PRO, however, said the ministry was committed to improving on the work done on some of the roads to ensure that all roads were re-marked to keep them safe at all times.

“The President has declared this year as the Year of Roads again and so we are hopeful that we will improve on the works,” Mr Kwakye said.

Reacting to the observations, the Director of Communications at the National Road Safety Authority (NRSA), Mr Kwame Atuahene, told the Daily Graphic that the authority had also noticed with displeasure the situation, which posed a danger to road users.

He said it was part of the plan of the authority this year to wage a campaign for the proper maintenance of all street markings across the country.

“We are aware of the situation and the danger it poses to road users, so it is even part of our plan this year to ensure that the mandated institution, which is the DUR, is made to sit up,” he said.

A city guard, Mr Matthew Andam, told the Daily Graphic that the markings on the ceremonial roads looked visible and bright because they were repainted periodically during state events.

He suggested that in between those periods, the government must ensure that the lines remained visible.

In a separate interview, the Regional Maintenance Engineer at the DUR in Accra, Mr Kwame Obuobi, said most of the markings on the busy roads within Accra, such as the Liberation Road, had been freshly painted but there were a few that needed to be redone.

He said road markings were not permanent features of roads and had the tendency to fade over time, hence the need to remake them over a period of time.

"This year, we will continue with the work we did last year to ensure that the markings are visible," he said.