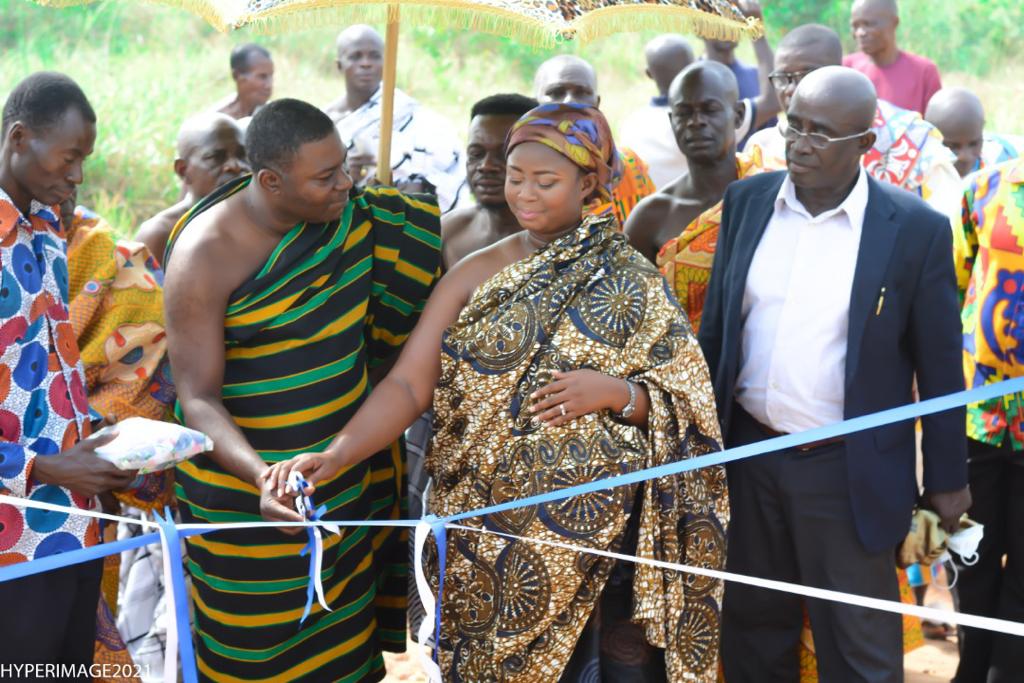 The Nkosuohemaa (middle) being assisted to cut the sod for the project. Follow @Graphicgh

Exploring Dreams Foundation, a Non-Governmental Organisation (NGO) at Assanso, a farming community in the Amansie East district of the Ashanti region, has cut the sod for the construction of a GH₵200,000.00 skills training centre for widows and school dropouts.

The first phase of the project is to build a modern bakery to give the targeted beneficiaries including orphans and less-privileged, hands-on training to become self-reliant.

The second phase is to have an assorted talent development centre to groom and build capacities in various fields.

The founder of the foundation who also doubles as the Nkosuohemaa of Assanso, Nana Yaa Barnie Twumasi Ankrah, said at the ceremony that it was her wish to end unemployment in the area, especially among women soon.

She said most widows have become vulnerable because of they were over-reliant on their deceased husbands.

"This is to end that era and make women resourceful. I see a lot of men take advantage of these widows, use and dump them. This is not good for our community and we must end it," the Nkosuohemaa said.

She said the foundation has also provided the centre with a truck to help fast truck activities of the facility.

With the help of donors, the foundation is offering financial support to needy but brilliant students within the area to pursue higher education.

Over the years, the foundation has provided basic schools in the area with some teaching and learning materials to augment the government's effort.

The Assansohene, Nana Karikari Appau II, urged the youth to take full advantage of the programme and acquire some skills to earn a living in the future.

The Headmaster of Assanso SDA Primary School and Board Chair of the foundation, Francis Guggisberg, called for support to ensure that none was left behind in the acquisition of knowledge.

He expressed appreciation to the foundation for coming to the aid of the community.

The foundation also organised a party for the less-privileged, orphans, widows, and the aged.

Gifts including shoes, clothes, bags of rice, cooking oil and sardines were distributed.