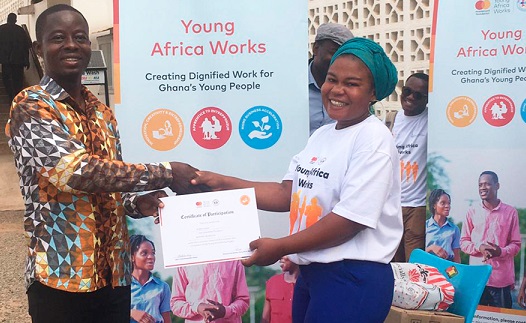 Alhassan Tong Suglo, a Director of the Regional Coordinating Council, presenting the package to Mariam Nuhu Adams at the ceremony Follow @Graphicgh

The first beneficiaries of the Young Africa Works (YAW) project have graduated with a call on the graduands to set up their own businesses to improve their standards of living.

The graduands received start-up kits to expand their own businesses to become self-employed.

The YAW project, an initiative of Master Card Foundation, is being implemented by GEA with the objective to train and expand their businesses to become entrepreneurs with the capacity to create more jobs for the youth.

“The YAW project provides opportunities for young women and men to realise their potentials, unleash their creativity and innovativeness and develop effective leadership skills for women-led enterprises thereby improving their capacity to create employment”, he said.

Mr Abdul-Moomin said as part of their training programme, the trainees had been introduced to how to access finance and market the products they produced.

He said the goal of the project was to provide employment and income opportunities for 39,000 young men and females between the ages of 18 and 35 years with 70 per cent being females.

Mr Abdul-Moomin said their emphasis was mainly on females since they contributed over 90 per cent of their resources to manage the home, adding that females were able to run successful enterprises that benefited themselves, increasing the economic, educational and health outcomes of their dependents and the society.

On behalf of the recipients, Mariam Nuhu Adams, who is a fashion designer, commended the authorities of GEA and Master Card Foundation for the knowledge to enable them to be abreast of more innovative methods to enhance their businesses.