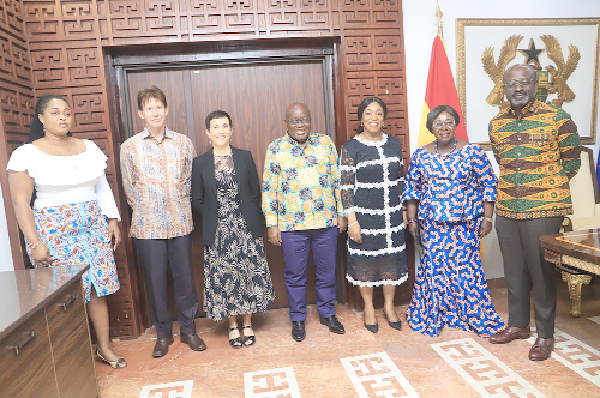 •President Nana Addo Dankwa Akufo-Addo with Ambassador Diana Acconcia (3rd left), the Head of the European Union, during the visit to the Jubilee House. With them are EU delegation and government officials. Follow @Graphicgh

Two envoys from the European Union (EU) and Hungary have bade farewell after the end of their duty tours in the country.

They are the Head of the EU Delegation to Ghana, Ms Diana Acconcia, who had been in Ghana for almost two years, and the Hungarian Ambassador to Ghana, Mr Andreas Szabo, who spent five years.

Ms Acconcia, the first to call on the President, said the partnership with Ghana had been evolving from a donor recipient relationship to a partnership of equals based on common values and mutual interest which was in line with the Ghana Beyond Aid vision.

Mr Szabo, on the other hand, was proud of his country’s contribution towards improving Ghana’s waste management, citing the establishment of waste water treatment plant in Kumasi as one of the high points of his tenure of duty.

Ms Acconcia described Ghana as a country that was likeminded with EU on peace, human rights and multilateralism.

“You, Mr President, are a trusted interlocutor for the European leaders when it comes to tackling the challenges that continue to affect the region,” Ms Acconcia added, saying “I hope we can soon start supporting vaccine manufacturing in Ghana.

She said the COVID-19 pandemic had made it difficult to attain the Sustainable Development Goals (SDGs) but Ghana could bounce back with a committed government, the private sector and a vibrant society, and assured of the support of the EU to Ghana.

Responding, President Akufo-Addo said Ms Acconcia’s stay in the country had been one of the most successful by any envoy in his tenure.

He said she assisted in executing the new EU paradigm shift and his successful visit to Brussels as well as the consequent delisting of Ghana from the EU money laundering blacklist.

President Akufo-Addo mentioned the cooperation with the EU in establishing vaccine manufacturing plant in Ghana and said Africa was learning its lessons in order not to be caught pants down.

He commended the EU for its support in the fight against the terrorist’s expansion in the Sahel in the ECOWAS space which, he said, was a major concern to ECOWAS countries.

The President was also grateful for the COVAX initiative which brought the first batch of vaccine as well as money of about 90 million euros that assisted Ghana in the fight against COVID-19.

Mr Szabo described his five-year stay in Ghana as very successful and a great learning opportunity in dealing with Africa.

He also announced that after years of postponement, the President of Hungary would finally visit Ghana on January 13, next year.

“I think we made a great decision in coming to Ghana and we are successful because we are a new colour on your diplomatic map and will definitely stay here till the end of time.

He further said due to the success story in Ghana, they would open a Bureau in Abidjan and later an embassy in Senegal.

Mr Szabo indicated that as part of helping build capacity in waste management efforts, agreements had already been signed for the establishment of waste water treatment plants in Tamale and Takoradi, in addition to what had been set up in Kumasi.

The outgoing Hungarian envoy said his country had also increased the number of scholarship awarded to beneficiaries from 50 to 100 for young Ghanaians to learn in Hungary.

President Akufo-Addo, in his response, said Mr Szabo’s tenure had enhanced relations between the two nations.

“We are very happy about your tour of duty because it led to investments in education and sanitation, especially the support to Jospong, which would help the country. We are  also highly appreciative of the doubling of scholarship.”

“I am happy that we have proved that you can successfully work in the western part of Africa, especially with Ghana, as a good interlocutor for Hungary,” the President said.