EPA ready to partner Zoomlion, others for clean environment 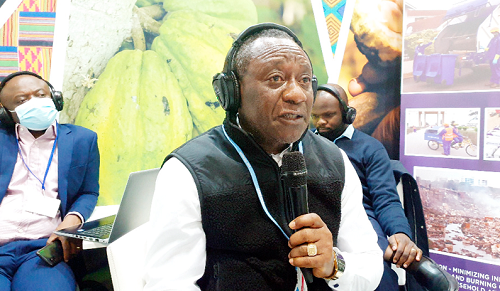 The Environmental Protection Agency (EPA) says it is ready to partner Zoomlion Ghana Limited, a subsidiary of the Jospong Group of Companies (JGC), and other waste management companies to keep the country clean.

The Executive Director of EPA, Dr Henry Kwabena Kokofu, who gave the assurance, said the state agency was pleased with the activities of Zoomlion, stressing that it would collaborate more with the company to save the environment.

The EPA boss made the remarks on the back of a presentation by JGC at the ongoing UN Climate Change Conference (COP 26) at Glasgow, Scotland on what the company was doing to help the country address the negative impact of climate change.

He added that EPA was poised to open its doors to collaborative work with private players in the waste management space to ensure their works were backed by compliance.

The EPA boss, therefore, commended all private waste companies, especially Zoomlion, for their relentless efforts to rid the city of filth.

Dr Kokofu, however, underscored that EPA would not hesitate to apply sanctions to whoever would want to thwart the efforts of the private enterprises in their work by not complying with rules and regulations.

According to him, metropolitan, municipal and district assemblies (MMDAs) had the responsibility to effectively manage waste within their jurisdictions and urged them to step up their game in the management and disposal of waste while urging Ghanaians to brace themselves for the reality of paying a bit more to ensure proper waste management in their communities.

“We must make a concerted effort to deal with the waste we generate. The consciousness of the nation must be awakened, and all the religious and traditional leaders must join in awakening this consciousness among Ghanaians,” Dr Kokofu said.

He said the EPA would also be monitoring every stage of the country’s waste disposal value chain.

That, he explained, would ensure the government got value for money in the management and disposal of waste.

Dr Kokofu explained that the EPA’s decision was to enable them to track where and how, especially, electric wastes were being disposed.

The off-taker facility that would help them use them as raw materials to the recycling plant.

That, when done, he said, would “help us as a nation to have data on how much we are collecting.”

Meanwhile, Zoomlion has welcomed the decision of EPA to monitor every stage of Ghana’s waste disposal value chain.

As representatives of the company, the move will spur them on to continue to deliver quality services.

At the ongoing world climate change summit, the Consultant, Engineering, Design and Projects Department of the Jospong Group, Mr Israel Boakye Acheampong, in a presentation, explained that the group was using the opportunity presented at the COP26 to show its contributions to the climate change space with innovative ideas to sustainably manage waste in Ghana with a positive impact on climate.

His presentation focused on JGC’s integrated waste management approach that combines innovation, technology and management based on reuse, recycling, recovery and safe disposal of waste since 2006.

To address indiscriminate dumping and burning of waste in Ghana, Mr Boakye Acheampong noted that Zoomlion had hugely invested in storage facilities with bins and collection systems in the country, which had improved waste collection from homes, from about four per cent in 2006 to about 21 per cent in 2021.

For her part, the Managing Director of Africa Environmental Sanitation Consult, the research wing of the Jospong Group, Dr Abena Antwi Asomaning, who is also at the climate change summit, minced no words in asserting that the activities of Ghanaians had contributed to the climate change condition.