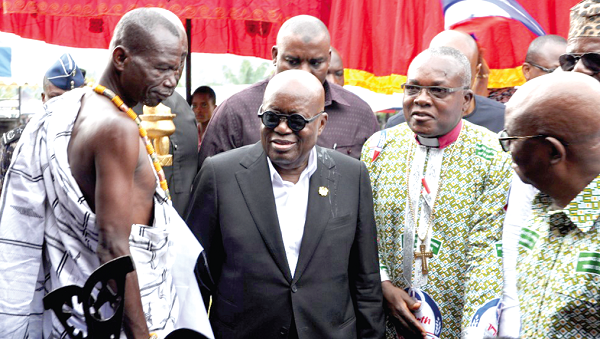 President Akufo-Addo (2nd from left) on his arrival at the durbar. With him are Rt Rev. Dr Lt Col Bliss Agbeko (rtd), (2nd from right), Moderator of the General Assembly of the EPCG, and Archibald Letsa (right), the Volta Regional Minister
30.5k Shares

He said the church had contributed immensely to quality education, health care and productivity over the decades.

The President said this when he graced a grand durbar to climax the 175th anniversary of the church at Peki-Blengo in the Volta Region last Saturday.

The anniversary was on the theme: “A journey of 175 years in Ministry – Achievements, challenges and the way forward”.

President Akufo-Addo urged the church to revisit the vision and sacrifices of the Bremen missionaries and re-inculcate the spirit of hard work, integrity and communal service among young people, saying the fading of those attributes in contemporary society was not helping to achieve set national development goals.
“Students of EPCG schools were distinguished by their behaviour,” added.


Touching on the environment, he said the clean and well mapped-out houses in communities of the EPCG and the church’s environmental protection programmes were worthy of emulation.

The President further praised the church for its valiant role in preserving traditional music, which said helped to promote talents and cultural values.

“Since 1847, the EPCG has brought light to where there is darkness and brought hope to the hopeless,” he added.

He said the 175th anniversary of the church was worth celebrating on an outstanding note, considering the great achievements of the church in various areas of human development and nation-building.

President Akufo-Addo re-affirmed the government’s firm stance to continue working with the EPCG to improve the quality of life in every part of the country.

He donated GHc50,000 to the church and pledged to build an astro turf in Peki as a monument in honour of the celebration.

The Deiga of Peki, Deiga Kwadzo-Dei XII, commended the government for exhibiting a commitment to ensure the completion of the only trunk road that ran through the entire Volta and Oti regions, “our infamous Eastern Corridor Road”, saying someone started it but it would take someone else to complete it.

He touched on the free Senior High School policy, saying it had enabled more children from the countryside to continue their education.

However, Deiga Kwadzo-Dei said, with the extensive educational programme in Peki, only about a third of junior high school students in the Peki area benefited from the programme due to the non-availability of space in the two senior high schools in the area.

“We will be grateful if you would grant that one of the TVET institutions be built for us to cater for the large population of children who drop out each year and are loitering our streets and provide them with employable skills,” he added.

The Moderator of the General Assembly of the EPCG, Rt Rev. Dr Lt Col Bliss Agbeko (retd), appealed to the government to convert the EPCG’s colleges of education to universities of education to promote higher standards.

He said the EPCG was still committed to promoting quality education, health services and agriculture to astonishing heights in the country.

Rt Rev. Dr Agbeko said the EPCG placed a high priority on agriculture and appealed to the government to support the church with tractors and other equipment to enable it to contribute immensely to the Planting for Food and Jobs initiative to produce more food for the population.

He announced plans by the E. P. University College, Ho, to specialise as an agricultural university and said any support from the government to realise that dream would benefit the entire country bountifully.

The Moderator called for a return of the EPCG’s hospitals at Adidome and Worawora in Volta and Oti regions respectively to the church, so that they could provide more specialised, quality and accessible medical services for the people.

Among the large gathering at the durbar were chiefs from the Anum and the Akwamu Traditional areas, both in the Eastern Region, and a delegation from the Eglise Presbyterienne du Togo, a sister church of the EPCG.