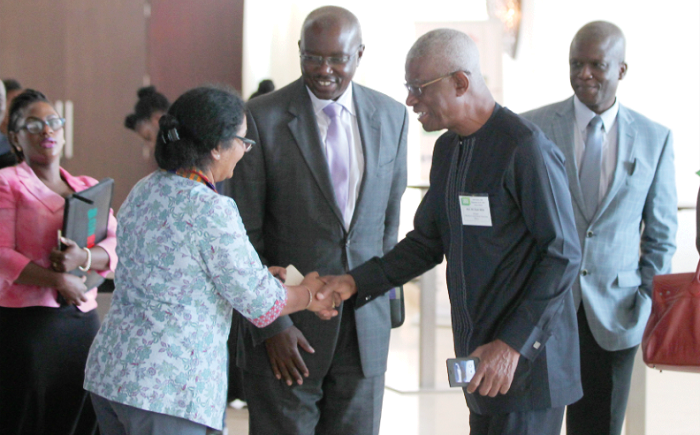 Ghana will, from next year, start the implementation of an environmental programme to significantly reduce deforestation and degradation in the country’s cocoa landscape.

The $199-million programme will end in 2021 and is estimated to produce 316 million tonnes of carbon dioxide equivalent emission reduction.

The programme is part of the National REDD+ (Reducing Emissions from Deforestation and Degradation + Conservation of Forests, Sustainable Forest Management and Enhancement of Carbon Stocks) initiative.

Known as the Ghana Cocoa Forest REDD+ Programme (GCFRP), it is expected to be coordinated by the Ghana Cocoa Board (COCOBOD), and the National REDD+ Secretariat under the Forestry Commission in partnership with other stakeholders, including civil society, traditional authorities and the public and private sectors.

The Chief Executive of COCOBOD, Dr Stephen K. Opuni, announced the project at the 22nd meeting of the Participants Committee of the Forest Carbon Partnership Facility in Accra yesterday.

He observed that “an integrated approach to facilitate large-scale changes in farming practices and land use decision making is required to reduce deforestation and degradation and promote forest growth”.

The GCFRP will require farmers in hotspots of deforestation and degradation to, among other things, adopt climate smart cocoa practices, agree not to deforest and encroach, protect non-timber forest products at forest-fallow areas and institute forest protection rules.

The result, Dr Opuni said, would, beyond reducing emissions, ensure that Ghana produced the world’s first climate-smart cocoa beans, as well as generate substantial non-carbon benefits such as “improved livelihoods, sustainability and conservation of biodiversity”.

It assists countries in their REDD+ efforts by providing them with financial and technical assistance to build their capacity to benefit from possible future systems of positive incentives for REDD+.

Participants at the meeting, which is scheduled to end on Friday, are deliberating on global efforts targeted at advancing REDD+ implementation.

In Ghana, about 65 per cent of the rural population depend on the forest for fuel needs, according to Ministry of Energy figures.

Ministry of Lands and Natural Resources records also indicate that at the turn of the 20th century, the country’s forest cover stood at 8.2 million hectares but that has reduced to about 1.6 million hectares.

Deforestation and land degradation open the country up for climate change impacts that include sea level rise, drought, the drying up of water bodies, erratic rainfall pattern and reduced crop yield.

The Minister of Lands and Natural Resources, Nii Osah Mills, was of the view that in tackling climate change through initiatives such as REDD+, it was imperative to ensure that individual efforts were well coordinated towards the attainment of a broader goal for a better climate and environment for future generations.

The World Bank Country Director, Henry Kerali, celebrated Ghana’s achievement in pursuit of the REDD+ agenda but stated that there were trade offs to make.

“Today, the pursuit to mitigate the adverse impacts of climate change and address the challenges that countries face in finding solutions to protect the environment is at the forefront like never before.

“This is a legitimate concern as countries such as Ghana grapple to find the right balance between their national development agenda and protecting their natural resources.  Like many others, the government of Ghana has consistently demonstrated its commitment to make efforts at addressing environmental challenges, including deforestation and forest degradation,” he said.

He, however, said the solution was in right policy initiatives to meet the dual objective of sustainable forest use and socio-economic benefit for societies.