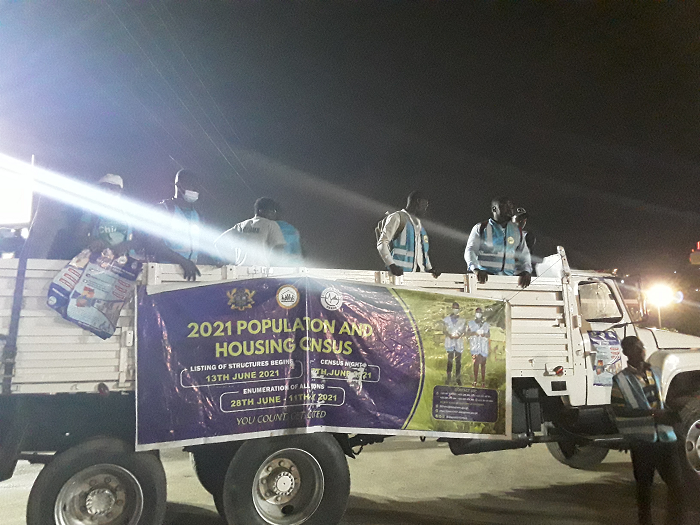 Some of the enumerators on the float Follow @Graphicgh

This comes a day after enumerators visited different places in the area to begin counting of people.

Last Sunday, enumerators together with brass band and spinners went on a float in communities including Ablekuma, Anyaa, Sowutuom, Awoshie, Santa Maria, Mambo, and Olebu to begin the begin the exercise.

There were other activities including the lighting of bon fires, tolling of church bells, and Azan from mosques to remind people of the impending census and the need to participate.

The enumerators in the 2021 Population and Housing Census (PHC) visited various places to count people in homeless households in makeshift structures and open spaces, described as “outside sleepers”, people who were in transit, those at transport terminals, those who were spending short stays in institutions such as hotels and guest houses and hospitals.

Today (Monday), the field officers moved into full gear from house to house to ensure that every individual and household is counted.

Later in an interview, the Municipal Census Officer of the GCMA, Mr Albert Onai, said so far the exercise was going well.

Mr Onai called on every individual living within the territorial waters of Ghana to ensure that they were counted as well as assist the enumerators to make their work successful.

He, therefore, assured that all the information provided would be secured and would not be revealed to a third party.

He said some of the information requested from people would include gender, economic status, physical problems people are facing, religious background, economic activity engaged by people, family members who have travelled.

He said the enumeration stage would take about two weeks to complete the exercise, after which would take some time before the data is entered into the system.

Stating the importance of the exercise, Mr Onai said it would help with policy planning, formulation and implementation in the country.

“Everyone must be concerned about this exercise because it will go a long way to help the country. It will help in getting data on a lot of information that would be needed for economic planning.

“I want to call on every individual living in the country to show keen interest in the exercise because it helps with planning by policy makers including the government and non-governmental organisation (NGO). People must not be indifferent about this because it is for our own good,” he said.

He said all the logistics needed to ensure that the exercise was successful had been supplied.

Mr Rahman also called on Ghanaians show keen interest in the exercise to make it successful.