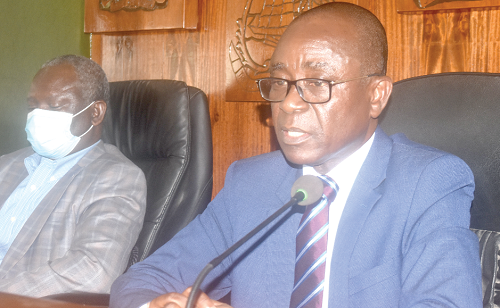 The West African Examinations Council (WAEC) has said it is closely monitoring the conduct of school candidates in the ongoing West African Senior School Certificate Examination (WASSCE) in 11 senior high schools (SHSs) in the country.

This follows a tip-off the council has received on those schools where it is alleged that candidates are planning to cheat in the examination.

The monitoring exercise forms part of measures the council has put in place to safeguard the integrity of the WASSCE.

Other measures are intensifying inspection, withdrawal of erring supervisors and invigilators from providing services for the council pending further sanctions, scrutiny of scripts of schools where cheating had been reported and continuous tracking of rogue websites and social media cartels, in collaboration with the security agencies.

The Head of the Test Administration Division of WAEC, Mr George Ohene-Mantey, who disclosed this at a press conference in Accra yesterday, said the council remained focused on its mandate of conducting credible examinations at all levels, and that “despite the challenges, we are steadfast in our commitment to conduct the 2021 examination”.

On the Physics One and Two and the Business Management One and Two examination papers which were originally scheduled for yesterday but were said to have leaked, he said a new date for the papers, which have been rescheduled, would be communicated to the candidates in due course.

However, Mr Ohene-Mantey said the Auto Mechanics One and Two papers which were scheduled for yesterday could go ahead.

“As part of efforts to keep our publics well-informed, the council deemed it fit to give periodic updates to its stakeholders through your reliable media platforms on the conduct of the ongoing WASSCE for school candidates.

Mr Ohene-Mantey mentioned some of the irregularities they (council) had identified at some centres to include inside examination hall malpractice as a result of poor supervision and invigilation, institutionalised examination malpractice and the execution of pre-arranged plans to assist candidates to cheat by solving questions and distributing solutions to candidates.

The rest were smuggling of mobile phones into examination halls by candidates as they awaited solutions from platforms to which they had made payments, swapping of question papers at some centres and posting same on various WhatsApp platforms, he said.

“Our investigative team is tracking these websites/Whatsapp/Telegram groups whose modus operandi the team has identified to include enticing candidates to part with money by posting several fake versions of questions and posting of actual questions on paid for groups after receipt and opening of question paper packets at the centre,” he added.

Mr Ohene-Asare said even though there had been numerous versions of question papers that had been circulated, initial investigations by WAEC indicated that the circulation was not extensive.