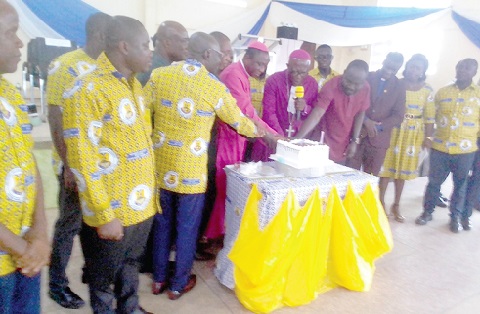 The Methodist College of Education (METCOE) at Akyem Asene – Aboabo near Oda has launched its 10th anniversary with a call on the tutors to instill discipline, academic excellence, Christian doctrine and holistic training in the students.

The Oda Methodist Diocesan Bishop Rt Rev. Isaac Kwame Boateng, who made the call at Oda last Wednesday, also admonished the students to be submissive, decorous, respectful to the college authority and attach special importance to their studies in order to come out with flying colours.

He further urged the government to give preferential treatment to teacher education since teachers moulded lives of all categories of professionals to contribute meaningfully to nation building.

Rt Rev. Boateng, who is the council chairman of the college, said the Church partner stakeholders to make METCOE a college of choice where everyone seeking to become a teacher would prefer it due to high discipline, God fearing and academic excellence.

He pleaded with all stakeholders, especially people of Akyemansa enclave to offer the needed support in the preparations and actual celebration of the 10th anniversary to ensure its success.

The Diocesan Bishop noted that the new council was made of people of highly knowledgeable in their fields of endeavour and were committed to seeing to the improvement of the institution.

In his report, the Principal of the college, Most Rev. Solomon Kwame Gyamerah, said the institution which was established in September, 2012 as private college with 174 students with 15 non – teaching and eight part – time staff, currently had a student population of 1,144 and 110 quality and energetic staff strength.

He said in addition to the physical expansion of the institution, the college authority had also produced dedicated teachers who were bearing good fruits in the discharge of their duties in the country’s basic schools.

Rev. Gyamerah stated that before he resumed duty in 2019, the faith – based institution which was in a state of huge infrastructural deficit, was currently rubbing shoulders with some of the established colleges with keen sense of pride, solidarity and excellence.

The secretary of the college, Ms Amy Agyapomaa , who gave the history of the institution, said METCOE was established in September, 2012 by Rt. Rev. Col. (Retd) Paul Adjei Brewu who was then the Oda Methodist Diocesan Bishop with the approval of the then Presiding Bishop of Methodist Church of Ghana, Most Rev. Prof. Emmanuel Asante.

She said the college started at its current temporary campus on St. Luke Methodist Cathedral’s land at Oda with the help of Birim Central Municipal Assembly which handed over a six classroom block that was intended for the Freeman Junior High School.

She stated that the chiefs of Asene and Aboabo had released 66 acre piece of land at the college’s permanent site.

Ms Agyapomaa said the college started as a private educational institution amid challenges like dwindling student numbers to as low as 58 intake in 2015/2016 until it was absorbed by the government in 2017 into the public system.

Other speakers at the function included Rt. Rev. Brewu, the Director of Tertiary Education of the Methodist Church Ghana, Rev. Nii Mai Ollenu and Mr. Frank Nkansah, the Municipal Director of National Identification Authority, who deputised for the MP for Oda, Mr. Alexander Akwasi Acquah.