Ellembelle gets help after rains wash away bridge 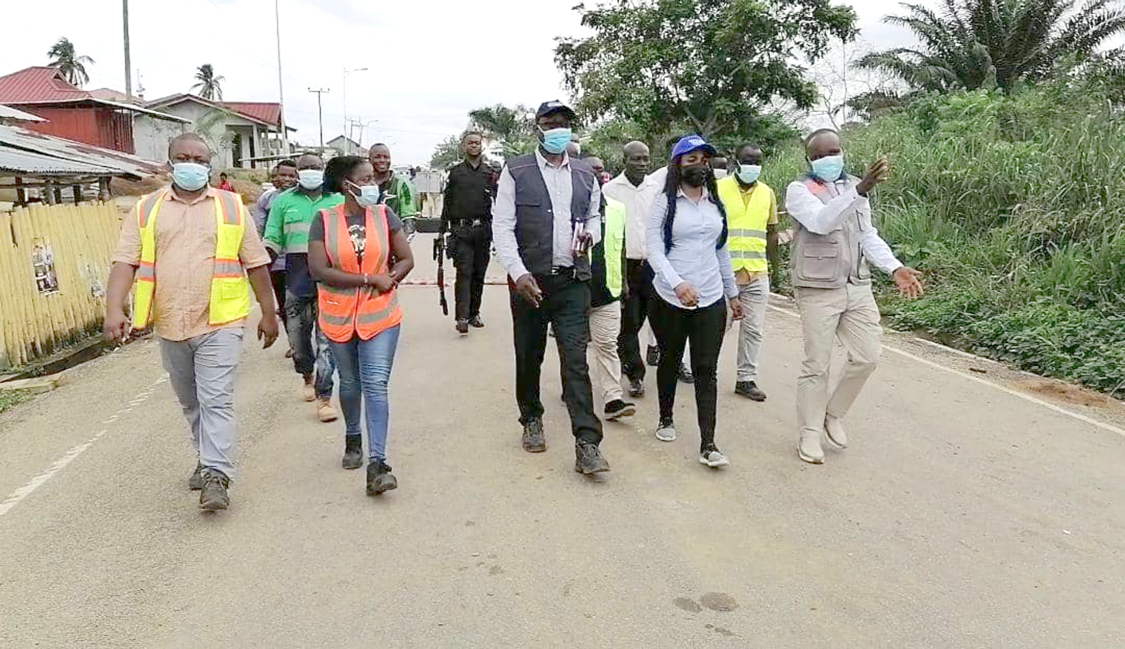 Mr Kwesi Bonzoh (right), Ellembelle District Chief Executive, explaining the extent of damage on the road to Mrs Mavis Nkansah-Badu (2nd right), Deputy Minister of Roads and Transport, and other members of the team

A team from the Ministry of Roads and Highways and its agency, the Ghana Highways Authority, is in the Ellembelle District in the Western Region to assess the extent of damage to roads in the recent flood for immediate and permanent remedy.

The team, led by the Deputy Minister of Roads and Transport, Mrs Mavis Nkansah-Badu, would visit communities such as Aiyinase and Menzezor which had been cut off from major towns, including the capital, Nkroful.

A 67-year-old bridge linking Aiyinase and Menzezor to the Apimanim-Elubo highway in the Ellembelle District was washed away last Saturday after two days of torrential rains in various parts of the Western Region, causing the asphalt road to cave in.

The rains left in its trail overflowing rivers and flooding in many parts of the district, with the Ghana Meteorological Agency warning of more rains in the coming days.

The situation has created traffic congestion and increased travel time, as motorists have to resort to winding detours to cart goods and passengers to commercial centres.

Even before the collapse of the bridge, the towns were noted for regular traffic jams.

Mrs Nkansah-Badu said to minimise the plight of the people, a contractor already working on roads within the Ellembelle enclave had been asked to move in to save the situation.

“As an immediate remedy, the contractor would create a temporary route linking the two communities and also facilitate the movement of the people, especially on Tuesdays and Fridays which are market days,” she said.

She said there would be a careful study of the area where the bridge collapsed so that engineers would factor the findings into the construction of the new bridge.

For the Western Region, the deputy minister of roads and highways said selected road projects were being done.

Mrs Nkansah-Badu assured the people of the region of the government's commitment to ensure that the ongoing road projects and those about to start were completed on schedule.

“The President is very passionate about the projects in the region and all projects, including the PTC interchange are all part of the lots that are ongoing and it would be done,” she said.

The District Chief Executive of Ellembelle, Mr Kwesi Bonzoh, commended the ministry and the government for the swift action to provide a remedy to the situation before the permanent solution.

“The affected road is one of the critical roads in the district as it provides access to critical areas of Menzezor and Aiyinase which is a commercial hub and its closure is creating a lot of congestion in the area, especially on market days,” he said.

The Ellembelle District Assembly, he said, would provide the needed support and cooperate with the contractor to ensure that the temporary and permanent solutions were successful.

The chiefs and people of the two towns have welcomed the swift response from the government.

In July 2009, a similar situation trapped hundreds of people in some communities in the Ellembele District due to the rising level of floodwaters as a result of continuous rains.

Roads to Nzema-Akropong were cut and more than 120 housing units collapsed in 13 other communities, while property, farm produce, livestock worth thousands of Ghana cedis were lost.