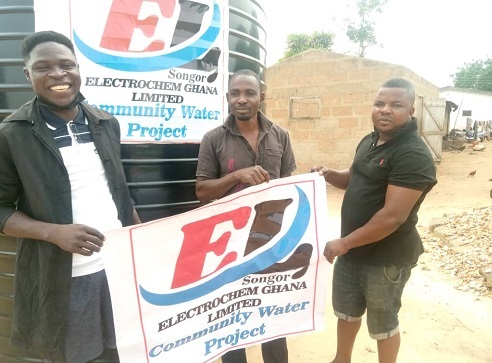 The Ada Youth Forum (AYF) has lauded the Ada Traditional Council, the government and other stakeholders for giving a facelift to the Songor Lagoon in a 15-year lease agreement with Electrochem Ghana Limited, an investor in the Songor salt project in Ada.

According to the development-oriented youth group in the Ada Traditional area of the Greater Accra Region, the leasing of the Songor Lagoon to the investor for mining of salt had brought rapid development to the traditional area just a year of operation and therefore called on all well-meaning Ada citizens to support the company to do more for the area.

The forum gave the commendation at a press briefing at Big-Ada, the ancestral home of the Adas.

The group later presented a copy of the press statement to the Paramount Chief of Ada, Djetse Nene Abram Kabu Akuaku.

The spokesperson for the group, Mr Ernest Kugblenu, who addressed the media, mentioned the number of initiatives the investor had brought to the area to include employment for over 2000 youth, construction of community pans, uninterrupted fishing in the lagoon, loans totalling over GH¢30,000 for some women for their trading activities, sports village at Sege and support to the Ada West District Polyclinic.

He dismissed rumour that the Songor Lagoon was sold to the investor and added that it was time citizens of the area erased that impression.

“For the avoidance of doubt, it is stated emphatically and clearly that the lease agreement which is now a public document is for 15 years and not 50 years as it was purportedly alleged by groups of people as well as some individuals in the area. Anybody who wants to ascertain the truth of this assertion can contact the traditional council for a copy of the agreement for confirmation or otherwise,” Mr Kugblenu stated.

Mr Kugblenu said the master plan of the investor indicated that there should be cooperatives formed in the various communities around the Songor Lagoon and it was being followed in earnest.

He said Electrochem Ghana Limited had introduced community pans to be managed by the various communities along the Lagoon as part of the lease agreement.

That, he said, deserved a lot of commendation since it gave more people access to the lagoon for their economic activities.

The group assured the people of Ada and the Ada Traditional Council in particular of its unflinching support for the investor in the Songor Project for the development of the area.

Nene Akuaku thanked the AYF for their support and reassured the people of the traditional area that the Songor Lagoon was not sold but leased for 15 years and not 50 years.

He said all rumour being peddled that he and the traditional council sold the Songor Lagoon to the investor was never true and should therefore be disregarded.