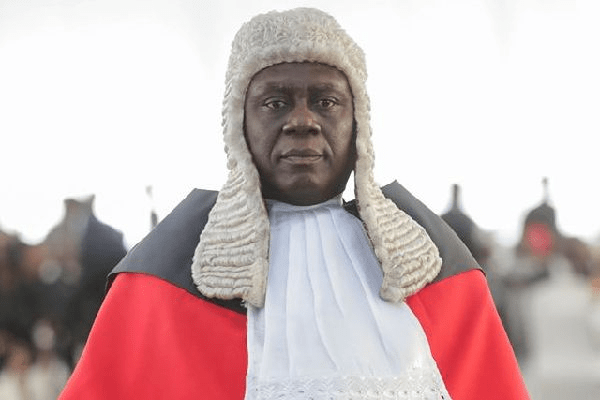 The presidential election petition filed by former President John Dramani Mahama challenging the declaration of President Nana Addo Dankwa Akufo-Addo as the President-elect in the 2020 poll has thrown the spotlight on the Chief Justice, Justice Kwasi Anin Yeboah.

The Chief Justice will have the responsibility of swearing in the President-elect on Thursday, January 7, this year, and at the same time empanel Justices of the Supreme Court to hear the election petition against the man he leads to swear the oaths of office and secrecy.

The Chief Justice, per the Second Schedule of the 1992 Constitution, is responsible for administering the Presidential Oath and the Oath of Allegiance, as prescribed in the schedule, to the President-elect in order for him to become President.

Also, Article 125 (4) of the Constitution makes the Chief Justice the Head “responsible for the administration and supervision of the Judiciary”.

This gives the Chief Justice the power to empanel the Justices of the Supreme Court who will decide the petition filed by Mr Mahama, the presidential candidate of the National Democratic Congress (NDC) in the December 7, 2020 elections.

So, in one breath, the Chief Justice is tasked with making sure the President-elect legally assumes his position as President, and in another, he must empanel a set of judges whose decision may or may not annul the declaration of President Akufo-Addo as President-elect.

Member of the panel?

Justice Anin Yeboah’s presence will be felt more if he decides to be part of the panel that hears the petition.

The Chief Justice, apart from being the Head of the Judiciary, is also a Justice of the Supreme Court.

He, however, assumes the position of being the first among equals at the Supreme Court and, therefore, presides over any panel that includes him.

He will have one vote, just like the other Justices, but as president of the panel, his influence will be felt throughout the hearing.

The president of the panel is the disciplinarian-in-chief who ensures that all the rules of court are followed accordingly.

Anyone who decides to jeopardise the hearing of the petition in the form of contempt of court will incur the wrath of the Bench, which will be expressed ultimately by the president of the panel.

Justice Atuguba’s name became synonymous with the 2012 petition. His strong voice, laced with intermittent coughs, good sense of humour and stern warnings became the talk of town throughout the eight months that the petition travelled.

This will not be the first time Justice Anin Yeboah will participate in an election petition in his nearly 40 years of practice as a lawyer and 12 years as Justice of the Supreme Court.

He was a member of the nine-member panel of Justices who heard the 2012 election petition.

In the 2012 election petition, the then Chief Justice, Justice Georgina Theodora Wood, empaneled a nine-member panel to hear the petition, but excluded herself.

Justice Atuguba, then the most senior Justice of the Supreme Court and member of the panel, assumed the reins as president of the panel.

Current Justices of the Supreme

Four of the nine Justices who sat on the 2013 election petition are still in service. They are Justices Anin Yeboah (current Chief Justice), Julius Ansah, Jones Dotse and Paul Baffoe-Bonnie.

Any of them and the 13 other Justices of the Supreme Court can be selected by the Chief Justice to form whatever panel he deems fit to sit on the petition filed by former President Mahama.

Sources have told the Daily Graphic that Justice Anin Yeboah is likely to empanel a nine-member panel, just as was done  for the 2012 petition.

If he decides to be part of the panel, then expect him to be the topical issue throughout the duration of the petition, as happened to Justice Atuguba in the 2012 petition.

Per the new Supreme Court rules, C.I. 99, the case must be concluded within 42 days after the filing of the petition.

The respondents — the EC and President Akufo-Addo — have 10 days to respond to the petition (by January 8).

The Supreme Court will then have to rule on the petition within 42 days after the filing of the petition (February 10).

According to economic watchers, the 2012 petition did enough damage to the country’s economy, as there was uncertainty over the outcome, while its ramifications were not clear, thereby stalling investments by businesses and individuals, except for government business, although that also suffered a dip due to the lack of support from development partners.

With a shorter time frame set out for the current petition, it is expected that the outcomes will be known early enough to allow the government to settle in and prosecute state business.