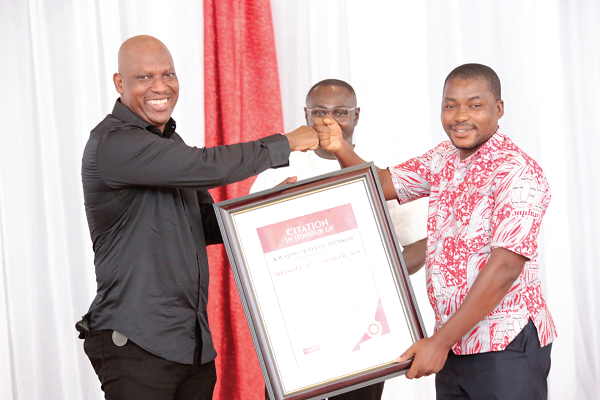 The Founder and General Overseer of Living Streams International, Rev. Dr Ebenezer Markwei, has called on the leadership and staff of the Graphic Communications Group Limited (GCGL) to continue providing the nation with truthful and accurate information.

He said the GCGL and its brand publications, led by the Daily Graphic, had stood the test of time and earned acclaim and applause for standing for truth and accuracy, adding that they must continue as such and not put out information that could bring the country to destruction.

He cited, as an example, a politician who had singled out the Daily Graphic as the most credible medium for accessing information on the just-ended elections, since the paper was certain to provide truthful and accurate information.

Rev. Dr Markwei said the Daily Graphic had not only been accurate but also “wise and circumspect”.

He gave the exhortation at the GCGL’s annual Thanksgiving Service and Awards Ceremony in Accra on Christmas eve.

“The Daily Graphic is the leading newspaper in the country. May it continue in the same distinctive manner. Nothing should come from the GCGL that will have the tendency to lead this nation to ruin,” he said.

The event was part of activities marking the company’s 70th anniversary.

Quoting from Matthew Chapter 2, Rev.  Dr Markwei said but for the wisdom exhibited by the Three Wise Men who refused to heed to the directive of King Herod asking them to bring him information on the birth of baby Jesus, the world would have turned out differently, as the King would have used the information negatively.

In like manner, he said, the GCGL need not put out any information that would be injurious to the safety and tranquillity of the country.      `

“As a newspaper organisation, you owe it to the country to be circumspect in what you report. And over the years, the Daily Graphic has stood the test of time: it has been wise and circumspect.

To that end, he said, at this critical moment in the annals of the Fourth Republic when the country was on the cusp of hearing another election petition, the GCGL owed it to the people to provide them with truthful information that will contribute to deepening the peace and democracy in the country.

He led the staff to promise “to never destroy this nation but contribute to its growth through the provision of truthful and accurate information, and may God be our helper”.

He said he was optimistic that Ghana would go through the election commotion and come out with its pride still intact.

“Ghana faces great years ahead, filled with prosperity, successes and honour. We thank God for the GCGL, and for being part of God’s plan to bring this to pass,” he said.

Rev. Dr Markwei, who shares God’s words on Graphic Newsplus, the digital version of the GCGL newspaper brands, urged the management of the company to throw more resources behind its online platform in view of its importance, relevance and reach.

He also encouraged the company to proudly publish its achievements and successes and vigorously promote its various brands, particularly the online and digital platforms.

“Just as the world is moving into a cashless society, using digital technology, so also does the future of news belong in the digital space,” he added.

He described Graphic Online as “one of the best products anyone can have”, adding that it was a very powerful product requiring that more efforts be put into it.

In attendance at the event was the Winneba Youth Choir, which dished out danceable hymns and Christmas carols.

On the occasion, the management and staff of the company, all dressed in their 70th anniversary cloth, wined and dined.

Some members of staff received long service awards, while others were rewarded for being best workers in their various units and departments.

Mr Kwadwo Baffoe Donkor, one of the company’s reporters in the Ashanti Region, was adjudged the Overall Best Worker in the company.

Twelve employees who received various professional awards in the year under review also received special incentives provided by the company.