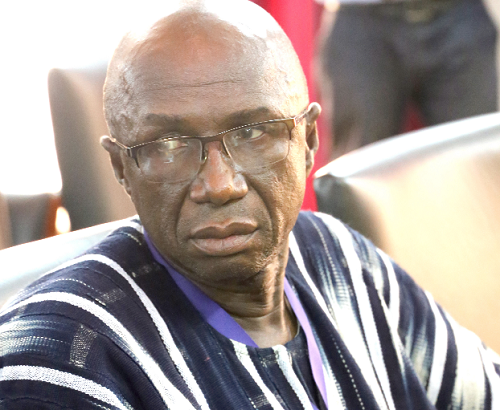 The three-man Ministerial Committee of Inquiry set up by the Minister for the Interior, Mr Ambrose Dery, to investigate the Ejura shooting incident that led to the death of two people will start its public sitting today at the Prempeh College Assembly Hall in Kumasi.

Mr Dery, under the instruction of President Nana Addo Dankwa Akufo-Addo, appointed the three-member committee last Thursday to inquire into the circumstances that led to the shooting of two civilians by military personnel during a demonstration by the youth of Ejura following the murder of Ibrahim Mohammed, aka Macho Kaaka, a social media activist.

The committee has the mandate to investigate the circumstances that led to the clash between the youth of Ejura and the security personnel made up of the police and military, on June 29, 2021, after the burial of Kaaka.

The committee is also expected to make recommendations to forestall the recurrence of such incidents anywhere in the country.

The committee, chaired by a Justice of the Court of Appeal, Justice George Kingsley Koomson, has up to Friday, July 9, 2021, to submit its report.

The other members of the committee are Ms Juliet Amoah, Executive Director of Penplusbyte, a civil society organisation and Dr Vladmir Antwi-Danso, a security expert, with Ms Marie-Louise Simmons, a Principal State Attorney, as the secretary.

Members of the committee touched down at Ejura yesterday to introduce themselves to stakeholders, including the affected families and traditional authorities, and to invite them to the hearing.

The committee is expected to take statements from witnesses, including the victims, families of the victims and members of the public who have information that would help the committee to unravel the circumstances that led to the incident.

On Tuesday, June 29, 2021, two people were shot dead and four others sustained gunshot wounds when the youth of Ejura clashed with security personnel supposedly detailed to ensure peace and order following an attempted demonstration by the youth the previous evening.

The deceased were Abdul Nasir Yussif and Muntala Mohammed.

Macho Kaaka had been attacked on Saturday dawn by unknown assailants who laid ambush for him in front of his house at Dagomba Line, a suburb of Ejura.

The assailants inflicted wounds on Kaaka and left him in a pool of blood and fled the scene.

Kaaka was rushed to the Ejura Government Hospital but later referred to the Komfo Anokye Teaching Hospital where he died on Monday, June 28, 2021.

Following the announcement of the death of Kaaka, the youth of Ejura went on a demonstration, demanding justice.

The police, with the assistance of the military, managed to quell the demonstration.

However, on Tuesday, June 29, 2021, on their return from the burial of Kaaka, the youth were alleged to have started causing commotion in protest of the death of Kaaka.

The subsequent deaths and injuries were recorded in the course of the confrontation that ensued between the youth and the security personnel.