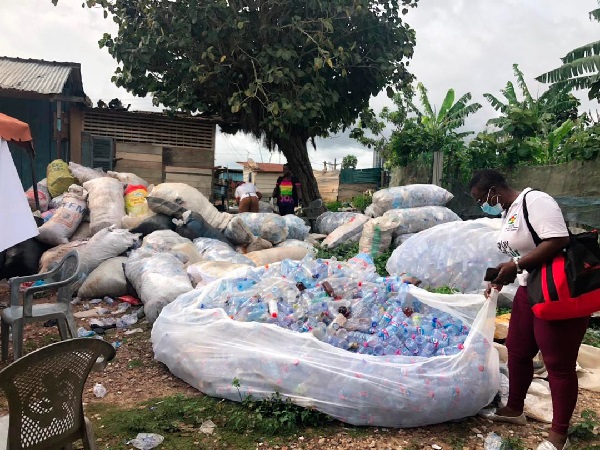 Residents of Effiakuma in the Effia-Kwesimintsim Municipality of the Western Region are making money out of plastic waste which was a major contributory factor to environmental pollution in the community.

Currently, the residents collect and keep used plastic and other products made up of plastics and later bought by recycling companies.

The community came to this understanding when in October, this year, the Ghana Recycling Initiative by Private Enterprise (GRIPE) with support from the Association of Ghana Industries (AGI) introduced the community buy-back initiative.

The initiative seeks to support beneficiary communities to generate extra-income while educating them on the value of plastic waste and its removal from the environment.

At one of the community buy-back events at Effiakuma, the Policy and Research Analyst of GRIPE and the AGI, Mr Theo Arthur-Mensah, said GRIPE was impressed with the level of cooperation the team had from the community saying “we are encouraged by their commitment and quantity of waste they came to exchange for cash”.

He said many companies were ready to recycle the plastic, but found it difficult to get the quantity required, therefore, the introduction of the community plastic buy-back and the response of the communities was making the project work.

He explained that the programme was based on the understanding that people could exchange plastics with cash by separating and selling their post-consumer plastic waste.

“Through this programme, we generate extra-income for local communities while revealing the value of waste and removing plastics from our environment.

The Buy-Back has since its inception collected over 6.6 tonnes of plastic,” Mr Arthur-Mensah further revealed.

He said the other objective on the initiative was to reduce poverty by providing employment opportunities through scalable solutions to create a pollution-free environment.

“We at GRIPE believe a sustainable waste management system is a shared responsibility between producers, consumers, brand owners, academia, waste management companies and the government, among others,” he said.

According to him, approximately 2,248-kilogrammes (Kg) of various forms of plastics were exchanged for cash.

Some of the residents who spoke to the Daily Graphic said they were educated on how waste should not be seen as waste but rather a raw material for the next production line.

A resident, Mr Abdul Rahman, said they were not only made to understand that waste was money, but they were assured an “off-taker would come and buy the plastic waste they had collected and true to their words, the off-taker has come to buy the plastics we gathered in our homes”.

Another resident, who gave her name only as Ms Regina said just keeping the empty sachet water and selling it back to get money to buy more water at least for the home was good and also kept their environment clean.

The community buy-back initiative was launched in April, this year, and has been implemented through sensitisation programmes in schools, clean-up exercises and other events where consumers are sensitised to segregate their waste at home before taking their plastics to designated areas for collection.