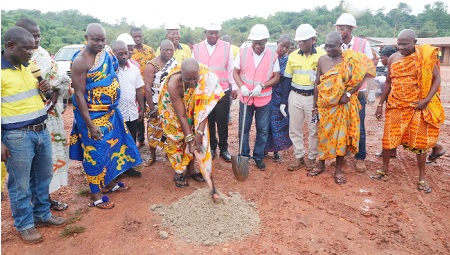 Nana Kojo Appiah, the Chief of Ayanfuri, performing the sod-cutting ceremony for the projects
30.5k Shares

The Edikan Trust Fund, in collaboration with the Upper Denkyira West District Assembly, has cut the sod for the construction of a $500,000 market, lorry station and place of convenience at Ayanfuri in the Central Region.

The facilities, which are scheduled to be completed within six months, are to improve general economic and living conditions of the people in the area.

The Edikan Trust Fund was set up by Perseus Mining Limited, which operates in the Central and Western regions, to finance projects in its operating communities as part of its social responsibility.

The fund is also meant to assist at eradicate poverty and improve health, education and agriculture among others in the relevant communities to enhance living standards.

The Board Chairman of Perseus Mining Limited, who is also the Paramount Chief of Owirenkyi Traditional Area, Ahunabobrim Prah Agyensaim, said the project would provide a lifeline to the inhabitants to be able to meet their tax obligations.

Nana Agyensaim, who is a co-chair of the fund raising committee of the Green Ghana Project, planted a tree and encouraged the people to make such practices a habit to imrpove the environment.

The Sustainability Director of Perseus Mining, Edwin Alotey Acquaye, indicated that the projects would provide some relief to the residents of Ayanfuri and its environs.

He noted that the firm would leave no stone unturned to better the lot of the people in the catchment area.

The General Manager of Perseus Mining, Dr Stephen Kofi Ndede, said the company was always ready to partner with the local district assembly for such development projects whenever there was the need.

Dr Ndede, however, said the company overspent on security issues because of illegal mining activities and other criminal issues that threatened their smooth operations.

He said such spendings could have been channeled into development projects to improve various aspects of communities in the company’s operational areas.

The Chief Executive Officer of the Upper Denkyira West District Assembly, Richmond Koduah, expressed delight with the collaboration between the assembly and Perseus Mining

He said this would help the assembly to undertake development projects in the area.

He, therefore, urged other companies to come on board for more collaboration.

The Chief of Ayanfuri, Nana kofi Appiah, expressed gratitude for the projects, and urged the people to support the company to gain more development projects.