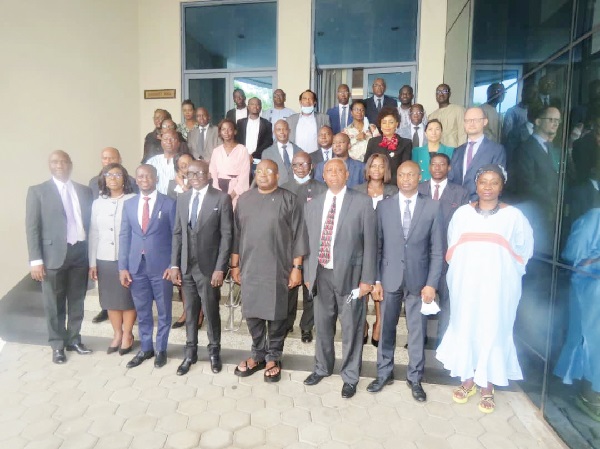 Mr Godfred Yeboah Dame (4th from left), Attorney-General and Minister of Justice, with some of his colleague Justice Ministers from ECOWAS member states Follow @Graphicgh

Ministers of Justice in West Africa are to establish a platform to promote the rule of law, peace and security in the subregion.

When ratified by member states, the platform will serve as a medium for the implementation of the Niamey Declaration to deepen the rule of law, promote peace and security and provide access to justice in the region.

This came to light at a meeting of Justice ministers of West African states in Accra yesterday.

Representatives from Mali and Guinea were not, however, invited to the two-day meeting due to the suspension of the two countries from ECOWAS following the coups d'etat in those countries.

Also unable to attend was the representative from Sierra Leone as a result of bad weather which grounded flights from that country to Ghana yesterday.

A Deputy Attorney-General and Minister of Justice, Mr Alfred Tuah-Yeboah, told the Daily Graphic in an interview on the sidelines of the meeting that growing incidents of insecurity in some countries in the subregion had necessitated the establishment of the platform.

“There have been incidents of insecurity, such as terrorist attacks, and there have also been instances when democratically elected governments extend their rule by amending their constitutions.

“So it has become necessary for Ministers of Justice to have a common platform and a voice, so that if anything happens, they can also come up with a statement; and because they are part of such an organisation, they can also pre-empt those incidents from occurring.

“After this meeting, we are going to have the draft copy circulated to all member states, and when we agree on it, there will be another meeting where we will all sign the agreement,” Mr Tuah-Yeboah added.

The Attorney-General and Minister of Justice, Mr Godfred Yeboah Dame, said terrorism and violent extremism were growing threats in Africa, with serious implications for peace and security.

In the Sahel, he said, terrorist groups were regularly attacking the people, including local and international security forces.

"The Niamey Declaration must be seen as a zero draft. It is my expectation that members will critically look at the issues and freely comment on the content, so that we can come up with an improved document which will serve the purpose of the subregion," he said.

He also said there was the need to strengthen state institutions to tackle poverty, corruption and inequality, which were often the causes of societal upheavals.

"Strengthening state institutions and civil society organisations to promote human rights is a sine qua non for preventing conflicts and ensuring lasting peace and security in the subregion," he said.

For example, he said, his outfit was undertaking reforms in some areas of the system to make the legal sector in Ghana more efficient to improve justice delivery.