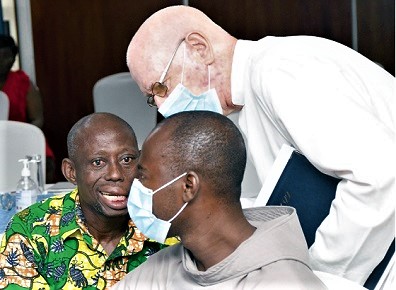 The early detection of leprosy is critical to its treatment and prevention of permanent disabilities, such as eating away limbs, the Programme Manager of the National Leprosy Control Programme, Dr Benedict Okoe Quao, has said.

He re-emphasised the fact that the disease was curable, adding that his outfit had intensified contact tracing for people exposed to the disease, including active cases, as part of efforts to achieve a zero-leprosy agenda by 2030.

Dr Quao was speaking at a day’s national stakeholders’ meeting on leprosy contact tracing and post-exposure prophylaxis (treatment or action taken to prevent disease) in Accra.

Participants included healthcare managers and professionals, religious and traditional leaders, development partners, survivors and a section of the public.

The manager said although the country was considered a low burdened leprosy nation, as indicated by the global standards of less than 500 new infections a year, a critical section of the employable population and the elderly were being disabled by the curable disease.

He attributed the situation to myths, misconceptions, stigma and the lack of knowledge around the disease, resulting in many seeking spiritual solutions to the purely medical condition, while others usually waited until disability set in before seeking help.

Dr Quao advised victims not to wait until they were traced or disabled before reporting to hospital but must look out for early signs, such as skin patches or loss of pigmentation, skin patches with diminished or absent sensations, numbness or tingling in the hands, feet, arms and legs, painless wounds or burns on the hands and feet and muscles.

Leprosy is a disease of the skin and nerves caused by a germ (Mycobacterium leprae).

It is an ancient disease known for causing deformities associated with huge social stigma and spread from an untreated person to others through droplets from coughing, sneezing, shouting and singing.

The leprosy germ can stay in the body undetected for a long period of between 10 and 20 years and can affect anybody, irrespective of age, sex and social status.

Dr Quao said patients would continue to spread the disease unless given full treatment course.

On why it was a condition of concern, he said the disease caused permanent nerve damage, leading to disability.

Throwing more light on contact tracing and its importance, a pharmacist with the Leprosy Control Programme, Victoria Nyarkoh, said it involved identifying persons who had been exposed to someone with an infectious disease and so were likely to also develop the disease.

“Contact tracing has helped us control diseases that can spread from one person to another for many decades. They include COVID-19, TB, yaws and influenza,” she said.

The Country Representative of the World Health Organisation (WHO), Dr Francis Kasolo, in a speech read on his behalf, said close contact with cases of leprosy, particularly in poor environmental conditions, had been found to be the main drivers of the disease.

“The WHO has made recommendations for the strengthening of surveillance and active case detection,” he added.