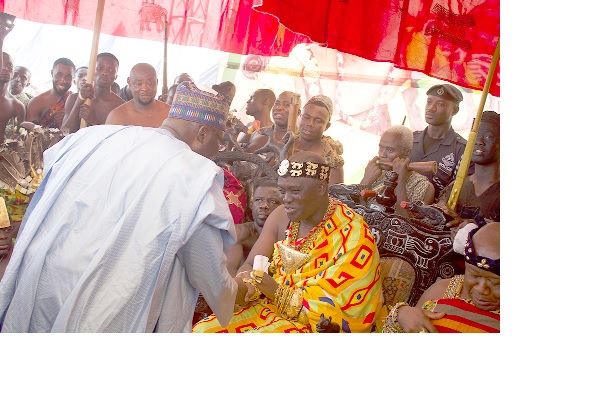 The Chiefs and people of the Dormaa Traditional Area last Saturday held a grand durbar at Dormaa-Ahenkro to round off activities marking the 20th anniversary celebration of the enstoolment of the Dormaahene, Osagyefo Oseadeyo Agyemang Badu II, and the Dormaahemaa, Odeneho Akosua Fimah Dwabeng.

The occasion, which also marked the 2019 Kwafie Festival of the chiefs and people of the area, was a rare gathering of traditional leaders from both Ghana and Cote d’Ivoire, politicians, the clergy and a cross-section of Ghanaians who filled every inch of the Nana Agyemang Badu Park to experience the occasion.

Traditional culture was at its best as the Dormaahene, the Dormaahemaa and their retinue of sub chiefs rode in palanquins from the seat of the Dormaa Stool, the Abanpredease, for the almost four-kilometre journey to the Nana Agyemang Badu Park amid firing of muskets.

The slow ride, the throbbing of fontomfrom beats, the occasional spirited and energetic movements of traditional executioners with sheaths in hand and the cheers from the enthusiastic crowd held the Dormaa-Ahenkro township virtually spellbound.

As the various chiefs, who were adorned in rich Kente apparels, arrived at the park, they showcased a rare traditional spectacle.
For hours, Osagyefo Oseadeeyo Agyemang Badu and Odeneho Akosua Fimah Dwabeng sat in state as the various chiefs, VIPs and corporate bodies queued up to pay homage.

Addressing the gathering, Osagyefo Oseadeeyo Agyemang Badu reminded chiefs in the country about the need to use their positions to collaborate with the government to develop the socio-economic potential of their areas.

Osagyefo Oseadeeyo Agyemang Badu bemoaned the indiscriminate sale of lands by chiefs for their own good and explained that lands were to be held “in trust for the people”.

He thanked both citizens and non-citizens of Dormaa for their support over the past 20 years and promised to continue to provide the needed leadership for the growth of the Dormaa Traditional Area and Ghana.

The Vice-President, Dr Mahamudu Bawumia, commended the Dormaahene and the Dormaahemaa for continuing from where their predecessors left off by initiating projects for the development of the people of the area.

“The 20 years of their reign have been characterised by numerous development achievements in the Dormaa State and the country as a whole, which has brought hope to Ghanaians,” he stated.

“He has successfully dealt with contentious chieftaincy disputes, which has brought peace in his area. Osagyefo’s quest for education in his kingdom has led to his facilitation of the establishment of a campus of the University of Energy and Natural Resources for its School of Agriculture at Dormaa-Ahenkro,” the vice-president stated.

Dr Bawumia described the Dormaahene’s passion for sports development as “unparalleled”, explaining that aside the assistance he offered to the Ghana Football Association and the Premier League Board, he had institutionalised his passion by establishing the Aduana Football Club from his own resources and guided the team to win laurels.

The Vice-President said although the government encountered some problems when it took over power, it had been able to make some progress.

He stated that through the implementation of the Planting for Food and Jobs Programme, the agriculture sector had seen a transformation, stressing that “today, Ghana is not importing maize.

We are producing more rice and we are urging people to eat more local rice.

We are building warehouses to store our excess harvest and this is making agricultural growth to turnaround remarkably”.

He also stated that the One district, One factory programme was on course, with many factories springing up across the country.

He added: “The government has restored stability in the economy. Inflation is down, the deficits are down, interest rates are down, the gross international reserves are up, the current account has improved, the trade account is in surplus, teachers and nurses training allowances have been restored, 350,000 people have been hired in the public sector.”

Dr Bawumia indicated that the agreement with Cote d’Ivoire for the setting up of a floor price for the sale of cocoa beans would see a major increase for a bag of cocoa from October 1, 2020.

“As we enter the election year in 2020, you will even see more because 2020 is a year of roads and our roads are going to see a massive upgrades across the 16 regions. We have performed better so I feel that when the time comes you will give four more years for Nana Addo Dankwa Akufo-Addo,” he stated.

Former President John Dramani Mahama, who graced the occasion, congratulated the Dormahene on his sterling leadership and the collaboration with five Ghanaian presidents during his reign to bring about development within his territory.