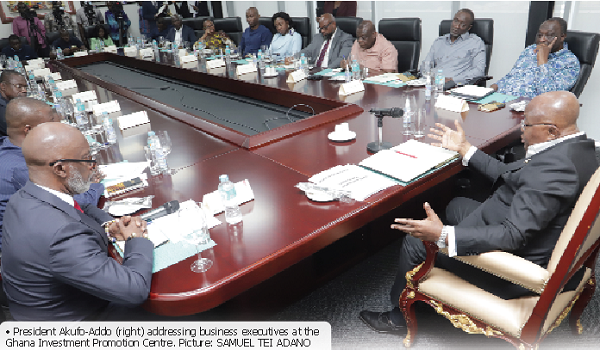 The government will continue to pursue innovative and sustained means of supporting the private sector to lead in the transformational development of the country, President Nana Addo Dankwa Akufo-Addo has assured practitioners in that sector.

He said the development of the private sector had been a difficult one due to a myriad of reasons, but the government remained resolute to continuously identify areas where the sector could profitably work together with the government to drive the national transformation agenda.

The President gave the assurance at a breakfast meeting with captains of industry in Accra yesterday.

The programme was put together by the Ghana Export Promotion Authority (GEPA).

President Akufo-Addo noted that countries that were agrarian, rural, raw materials producing and exporting but which had transformed themselves from low productivity to global giants were the ones whose private sectors were the dominant force in growth and development.

Citing the Asian Tigers as examples of booming private sector development, he said Japan, for instance, had Toyota and Nissan, which had become global brands.

“That is the example that has always inspired me as a public official and politician that we will get into a situation where the private sector of the country will be the lead vehicle for the social and economic transformation that we are all looking for,” he said.

The President said a lot was being done to promote the partnership between the government and the private sector, which was essential for the growth of the country.

One of such initiatives, he said, was the establishment of the Development Bank of Ghana (DBG), which was inspired by examples in other places such as the JFW of Germany and its role in the “so-called German miracle”.

He emphasised that most of the analyses that had been done on the private sector of the country had always identified lack of long-term funding as the major constraint to the sustained growth of the sector.

President Akufo-Addo said since assuming office, his administration had worked to establish the DBG, which took some time to be established because of the lack of funds, adding that the concept of the bank was truly a catalytic development of the private sector.

The Minister of Trade and Industry, Alan Kyerematen, said the Akufo-Addo administration assumed office when the country was in an International Monetary Fund (IMF) programme, but its strategic objective was to exit the programme.

Explaining further, he said there was no evidence that suggested that the IMF, by its programme, could create prosperity for a country because the fund came in purely for stabilisation, balance of payment support and liquidity support.

He indicated that while the government agreed to remain in the programme, it tried to work itself out of it, and within two years it was able to exit, with its chest out after meeting all the conditionalities.

Mr Kyerematen said the government was able to go through fiscal consolidation and prudent expenditure management and control and embarked on an aggressive transformation programme.

Taking a look at government borrowing, the minister said it was done for the execution of the transformation agenda.

Transformation, he explained, could not occur without resources, “and that was the main reason we had no choice but to borrow to fund the transformation agenda we were pursuing in parallel”.

Mr Kyerematen mentioned some of the transformation initiatives to include Planting for Food and Jobs, Planting for Export and Rural Development and the 10-point agenda for industrial transformation which was so comprehensive that it was an entry point the private sector could use as the basis for diversifying its portfolio.

He said in addition to the One district, One factory (1D1F) policy, which was part of the 10-point agenda, the government had identified 10 new strategic sectors to diversify the economy from cocoa, which were the petrochemical, bauxite and aluminium, iron and steel, pharmaceutical and automobile industries.