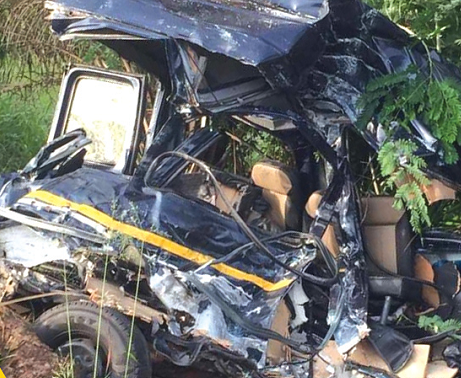 Six persons lost their lives and 34 sustained varying degrees of injury in two separate accidents involving vehicles colliding when their attempt to overtake other vehicles went bad in the early hours of yesterday.

In one of the accidents, five persons died at the Tefle Motorway Junction in the South Tongu District of the Volta Region when a blue Ford Transit bus crashed head on with a Hyundai Universe bus.

The remains of the deceased, four of whom have been identified as Logoshie Avumegah, 48; Joshua Agidza, 25; Beauty Fiakorme, 34, and Elorm Tsortome, 30, have been conveyed to the Sogakope District Hospital morgue for preservation and autopsy.

In the other accident, which occurred at the GHACEM Estate, near Apowa on the Takoradi-Agona Nkwantah road in the Western Region, one person died, with four others sustaining serious injuries when a pick-up vehicle driven by an alleged impatient driver, Francis Dadzie, collided with a fully loaded fuel tanker.

The injured persons were identified as Theophilus Aidoo, 22; Paul Quayson, 28; Alfred Sam, 26, and Emmanuel Dadzie, 54, who was pronounced dead at the Effia-Nkwanta Regional Hospital.

They were rushed to the Kwesimintsim Polyclinic, from where those in critical condition were referred to the regional hospital.

The Tefle accident, which also left 30 other passengers injured, occurred when the driver of the Ford Transit bus, with registration number GX-3886-17 and travelling to Accra from Keta with four passengers on board, attempted to overtake another vehicle ahead of it.

The Volta Regional Police Public Relations Officer (PRO), Sergeant Prince Dogbatse, told the Daily Graphic that the vehicle ended up crashing into the oncoming Hyundai bus, with registration, GT 6473-20 and heading to Aflao from Kumasi.

He said the collision split the Ford bus into two.

A joint rescue team from the police and the Ambulance Service was sent to the scene to engage in rescue efforts.

The injured persons included the drivers of both buses, Philip Kpodo, 35, and Kwadwo Baafi, who were receiving treatment, the police said.

Sgt Dogbatse cautioned drivers to be measured and patient on the road.

"The desire to wrongly overtake, arrive early and make more sales in the end lead to needless crashes and loss of innocent lives,” he said.

He urged the public to speak out when drivers became reckless on the road and report them to the police through the emergency numbers and at the various barriers for the necessary action.

The Commander of the Western Regional Motor Traffic and Transport Department (MTTD), Chief Superintendent Richard Appiah, told the Daily Graphic that the accident at Apowa, which occurred about 5:30 a.m. last Monday, involved the pick-up, with the registration number GT 9374-16, which was returning from Ewusiejoe in the Ahanta West municipality to Takoradi, and a fuel tanker.

He said on reaching the GHACEM Estate, the driver of the pick-up attempted an overtaking when there was  traffic congestion.

Unfortunately, there was a fully loaded fuel tanker, with registration number GN 6853-18 and driven by Ms Silvia Odoom, coming from the opposite direction towards Tarkwa.

Coming face-to-face with the fuel tanker, the driver of the pick-up, owned by G4 Security, a private security company, was left with no option but to ram into the fuel tanker, killing one of its occupants, with four others injured.

The police said the driver of the fuel tanker, who also sustained injuries, was rushed to the New Crystal Hospital in Takoradi, where she was treated and discharged.

Speaking to the Daily Graphic, the Western Regional Director of the National Road Safety Authority (NRSA), Nana Akua Ansah Cobbinah, described the accident as avoidable if the driver of the private security company had respected the road traffic regulation.

“We have, on many occasions during our campaigns, cautioned these security companies, especially G4S Security Services, to respect the rules,” she said.