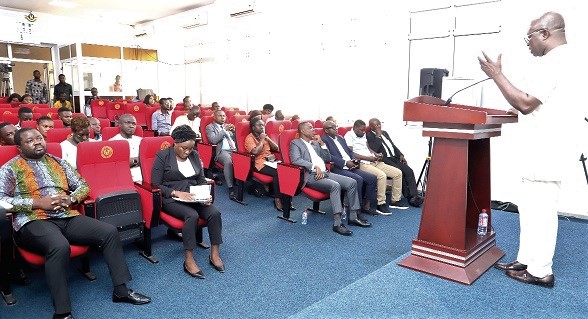 A Draft bill that seeks to transition the National Service Scheme (NSS) into an authority is before the Cabinet for approval.

The Executive Director of the NSS, Osei Assibey Antwi, who made this known in Accra yesterday, said when the bill is approved and passed into law by Parliament, the scheme would be empowered to take major decisions that would revolutionise its operations.

Again, he said, attaining the status of an authority would strategically position the scheme to make more impact by harnessing the potential of the youth for national development.

The executive director said this when the NSS took its turn at the State of Agencies Report at the Ministry of Information.

The platform offers opportunity for state agencies to brief the media on key programmes and developments within their various sectors.

Mr Antwi said various stakeholders had been engaged on the bill, leading to a validation of the document.

"After 49 years of existence, the NSS will celebrate 50 years next year. So we are saying that our mandate should not just be deploying young people to institutions for national service but equipping the youth with skills for them to make a living after the mandatory service to the nation," he said.

He said when the NSA became operational, it would be well-positioned to rake in more internally generated funds and lift the burden off the government.

As it stood now, he said, the scheme could not enter into any commercial or joint venture agreements.

He further said over the past four years, the NSS had leveraged digitalisation to improve on service delivery.

For instance, he said, through the introduction of a facial recognition metric application, the scheme was able to detect 14,000 ineligible people on the payroll, saving the nation GH¢112m.

Additionally, through an electronic platform created by the scheme, tertiary institutions could now submit the list of students for national service with ease, he said.

On youth unemployment, Mr Antwi called for strategic partnerships between the NSS and other institutions to build the capacity of young graduates to acquire employable skills.

He said as part of the deployment for employment agenda, the scheme had implemented modules, including a short teaching programme for service persons posted to educational establishments, youth in housing, macro, small and medium-size enterprises, accounting aid, data and research, as well as youth in agriculture.

On agriculture, he said, the scheme was focused on mechanised farming to attract young graduates into the sector, adding that processes were underway to establish farms in selected senior high schools (SHSs) across the country.

"We have already penciled some SHSs for the farming programme. Modalities are being drawn and once that is done, we will go into full-scale farming," Mr Antwi added.