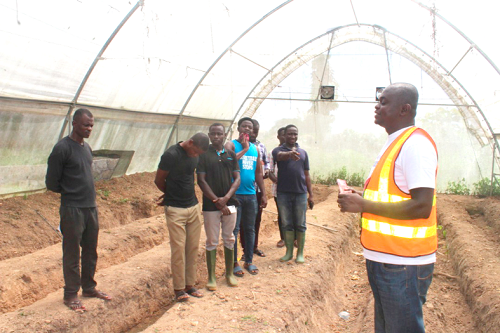 With the dwindling chances of the youth securing employment in the public sector, some of them have realised the need to take their destinies into their own hands by embarking on various economic ventures to better their lot.

However, the lack of funds to enhance their operations has become a hindrance towards realising their dreams to make it in the small enterprises sector.

In the Dormaa East District in the Bono Region, 10 youth groups, with a total membership of about 100 people have embarked on various economic ventures to provide members with incomes to support their lives.

The groups are into agriculture, agribusiness, hairdressing and other related businesses.

To assist them to realise their dreams, the Dormaa East District Chief Executive (DCE), Mr Emmanuel Kofi Agyeman, has personally donated a total of GH¢15, 000 to the groups which are based in eight communities to invest in their businesses.

The various groups were given cash ranging from GH¢1,000 to GH¢2,000, to pump into their businesses.

The Green House Farming Venture based in Wamfie is cultivating vegetables such as tomatoes, cabbage and carrots, while others are into poultry and grasscutter rearing among others.

Mr Agyeman last Monday inspected the various ventures and encouraged the youth not to relent in their efforts to provide incomes for themselves.

Ms Christabel Yeboah, 21, a member of the group which owns the Adom Poultry Farms based at Wamfie, told the Daily Graphic that their business was collapsing because of inadequate funds.

She said the DCE’s intervention came at the time the group needed assistance to purchase poultry feed and chemicals for their birds to protect them from diseases.

Ms Yeboah explained that the group made up of five people bought 500 birds to start the business, but due to inadequate funds to buy food and drugs to take care of the birds, 100 of them died, leaving 400 birds.

She said venturing into the poultry business required heavy investment and expressed the hope that other benevolent people would emulate the gesture of Mr Agyeman to help improve their businesses.

Mr Thomas Kwaku Owusu, a member of the group who owns Green House Farming Venture also at Wamfie, was of the opinion that efforts should be made to provide people who were ready to go into various economic ventures with start-ups and technical knowledge, since not all the youth in the country were lazy.

He said starting a business in recent times required money, explaining that the various youth groups in the area had invested much from their own resources and needed to be assisted to expand their ventures.

During a short ceremony to present money to members of the Adom Poultry Farm group at Wamfie, Mr Agyeman said the assembly had planned to allocate GH¢200,000 from its 2022 budget for youth development programmes.

He said the donation was his widow's mite towards the development of human capital and the creation of jobs for the teeming youth in the district.

Mr Agyeman said he was working in line with the government’s agenda and policies aimed at creating employment for about one million young people in the country.

He indicated his resolve to continue to monitor the various groups and their activities to ensure that they achieved the purposes for which such economic ventures were set up.

He advised the beneficiaries to invest the amount instead of using it for other purposes which could not yield any dividend.

Mr Agyeman challenged unemployed youth in the area to consider starting some businesses rather than looking up to the assembly and the central government to provide them with white-collar jobs.

That, according to him, would encourage the assembly or central government to come to their aid through the provision of start-ups and other resources needed to sustain their ventures.

Mr Agyeman said the government had young people at heart and would do everything possible to support them to acquire decent jobs to eliminate poverty among them.