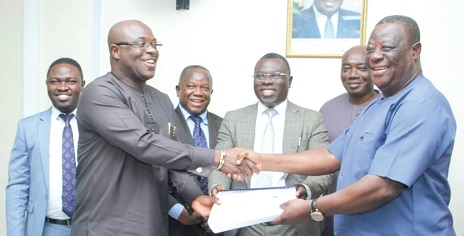 The government has awarded the Dome-Kitase road rehabilitation project in the Greater Accra Region on contract.

The GH¢195-million project, which will cover 23 kilometres, will start from the Dome Roundabout in the Greater Accra Region and end at Kitase, near Peduase in the Eastern Region.

The project which is scheduled for completion in 24 months, is being sponsored by the Kuwait Fund for Arab Economic Development (KFAED) and the government.

At a signing ceremony in Accra Wednesday, the Minister of Roads and Highways, Kwasi Amoako-Atta, said construction work would start at the end of July this month.

He said the project would enhance the socio-economic activities of the people living in the catchment area and also facilitate trade and economic integration between the two regions.

The minister expressed confidence that the contractor, First Sky Limited, would deliver the project on time and “with all competence and efficiency”.

“We went through the entire procurement processes and the best contractor emerged. And I want to assure the company that the government will support our own to deliver this project on schedule,” Mr Amoako-Atta added.

The Chief Executive of First Sky, Oliver Acquah, thanked the government for the confidence reposed in the company and gave an assurance that it would deliver the project on schedule.